Joe Root breezed to his 10th ODI hundred as England began their tournament campaign with an eight-wicket thrashing of Bangladesh. 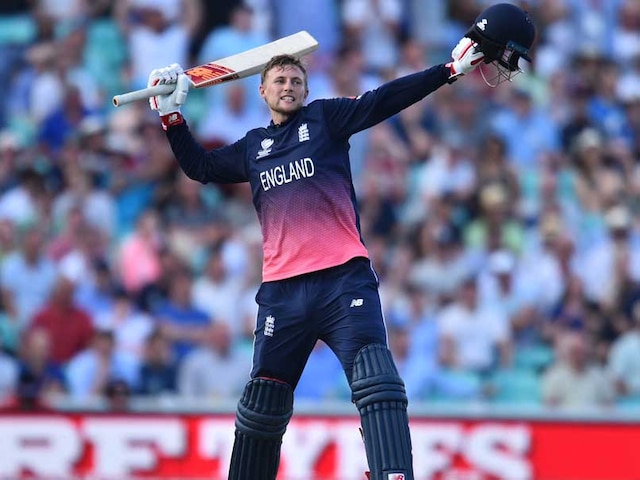 London: Joe Root breezed to his 10th ODI hundred as title favourites England began their tournament campaign with an eight-wicket thrashing of Bangladesh in the Champions Trophy opener on Thursday. Besides Root (133 not out off 129), contributions from opener Alex Hales (95 off 86) and captain Eoin Morgan (75 not out off 61) helped England chase down the 306-run target in 47.2 overs. It was the first time that 300 was successfully chased in the tournament history.

Put in to bat, Bangladesh did well to post 305 for six with opener Tamim Iqbal (128 off 142) making his ninth ODI hundred.

England, who came into the tournament at the back of a series win against South Africa, were expected to overhaul the target comfortably at the Kennington Oval.

That is exactly what happened after the home team lost out-of-form opener Jason Roy in the third over.

Roy's opening partner Hales and Root went about their business without taking too many risks and ended up stitching a 159-run stand at little over run-a-ball. Root's unbeaten effort was also his highest ODI score.

Hales was the aggressor in the partnership, hitting 11 fours and couple of sixes before missing out on a well-deserved hundred.

He fell trying to hit another one into stands and was holed out at deep midwicket after dispatching Sabbir Rahman for a four and six, leaving England at a well-placed 165 for two in 28 overs with 141 required of 22 overs.

Root was going at solid at the other end, busy collecting the ones and twos with incoming batsman Eoin Morgan expectedly going for his shots.

Such was the nature of Root's innings is that he had found the boundary just six times on way to reaching three figures off 115 balls. Soon after, he too changed gears by dispatching Rubel Hossain for a straight six and a four.

Morgan at the other end was finding the boundaries at will en route to his 33rd half century. It was a whirlwind innings from the skipper who ended up smashing eight fours and two sixes.

Bangladesh bowlers made the job easier for England. They looked far from threatening and management's decision to go in with four specialist bowlers on a flat wicket did not help their cause.

Earlier, courtesy Tamim's ninth ODI hundred and a 166- run partnership for the third wicket with Mushfiqur Rahim (79 off 72), Bangladesh shrugged off the disappointment of a batting debacle against India in the practice game.

The visitors made a safe start with Tamim and Soumya Sarkar (28) adding 56 runs for the opening wicket. Imrul Kayes (19) didn't score too many but the two senior pros, Tamim and Rahim then batted responsibly on a placid Oval track.

The stylish Tamim hit 12 boundaries and three sixes in his innings while Rahim struck eight boundaries in his 72-ball knock.

Tamim started on a cautious note getting his first boundary off 21st ball that he faced. His first confident shot was a straight drive off Mark Wood followed by a whip to long-leg. He cut and pulled with ferocity to complete the 50 off 71 balls. The six came off Moeen Ali -- an inside out lofted shot over long-off.

The century also came when he tapped Ali for a single to complete it off 124 balls.

It seemed that Bangladesh would get close to 330 but England fought back through Liam Plunkett who dismissed Tamim and Rahim off successive balls in the 45th over.

The twin strikes affected the scoring rate a bit before Sabbir Rahman smashed 24 off 15 balls to take his team past 300.

Medium pacer Plunkett was the pick of the bowlers for England, taking four wickets in his 10 overs and conceding 59 runs. The 50th over was bowled by Plunkett and it went for just five runs.