The four-time world champion was quickest in both the morning and afternoon sessions, ending up seven-tenths clear of in-demand Australian Daniel Ricciardo who was second for Red Bull. 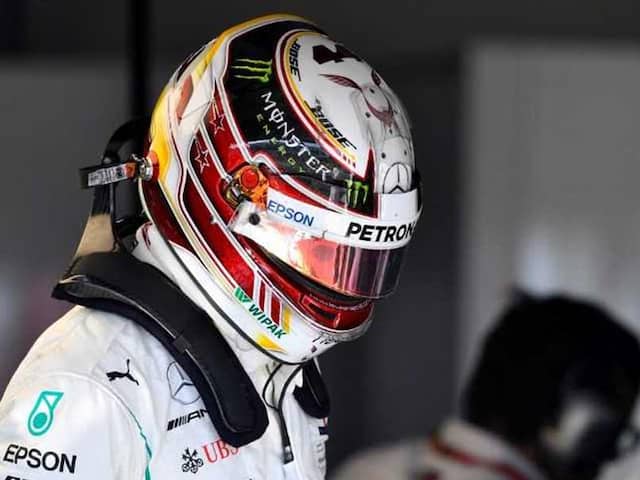 A delighted Lewis Hamilton made it 'double top' for Mercedes on Friday when, powered by an upgraded new engine, he outpaced his rivals in an eventful second practice at this weekend's French Grand Prix. The four-time world champion was quickest in both the morning and afternoon sessions, ending up seven-tenths clear of in-demand Australian Daniel Ricciardo who was second for Red Bull. "The new engine feels clean and fresh," said Hamilton. "But we won't really know its full potential until tomorrow when everyone gets to turn their engines up. "Overall, it was a good session and now we need to carry on this performance through the weekend." The session, run in hot conditions, with track temperatures hitting 48 degrees Celsius, and a gusty wind, was interrupted when Sergio Perez's Force India car lost a wheel at speed through turns five and six.

The wheel detached from his car and bounced clear down the straight as Perez came to a halt. He was unhurt, but the session was red-flagged to a halt temporarily.

Hamilton's Mercedes team-mate Valtteri Bottas, who was second in opening practice, was hit by a water leak in the afternoon and wound up seventh after being prevented from completing the second session.

This allowed Max Verstappen to take third behind his Red Bull team-mate ahead of the Ferraris of Kimi Raikkonen and championship leader Sebastian Vettel.

Hamilton was the first driver to dip into the 1:33s and then clocked 1:32.539 to move seven-tenths clear of Ricciardo at the top.

This was clear evidence not only of Hamilton's pure pace, but also his innate ability to learn a new circuit very quickly.

"This place is beautiful," he said. "It's really stunning down here. It's always a challenge when you come to a new circuit, but you're constantly learning new things and I love the challenge of trying to get into the swing of it before everyone else.

"There's a lot of different lines you can take and it's tricky to find reference points out on track. Apart from the colourful lines, it's difficult to tell where you are.

"There's a couple of places for example on the back straight where you're trying to find out where the corner is and it's really hard to see."

Ricciardo was quick to point to Hamilton's new engine as a factor even before its introduction was confirmed by Mercedes.

"They have an upgrade? I hope so because Lewis's time was pretty quick. It looks like we are chasing them this weekend."

Vettel was sanguine about his performance and potential in qualifying on Saturday.

"I think the car is quick, but I wasn't able to be quick," he said. "It's as simple as that -- sometimes you have these days, but let's see. It's a tricky track."

Behind the two Ferraris, Frenchman Romain Grosjean was sixth for Haas ahead of Bottas, two-time champion Fernando Alonso of McLaren, Kevin Magnussen in the second Haas and Pierre Gasly.

Marcus Ericsson, who had a high-speed crash in his Sauber at the end of the morning session, was unable to run as his car, which had burst into flames, was not repaired in time.

Kimi Raikkonen Paul Ricard French Grand Prix Formula 1
Get the latest Cricket news, check out the India cricket schedule, Cricket live score . Like us on Facebook or follow us on Twitter for more sports updates. You can also download the NDTV Cricket app for Android or iOS.