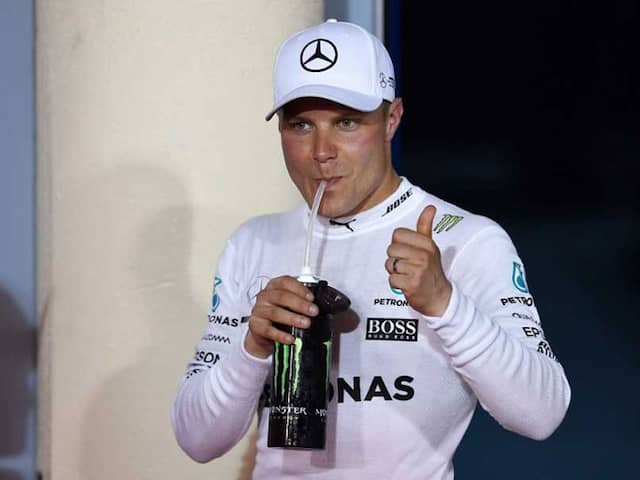 Valtteri Bottas roared to pole position ahead of his Mercedes team-mate Lewis Hamilton in Saturday's tense and closely-contested qualifying for Sunday's Austrian Grand Prix. The softly-spoken Finn clocked a track record fastest lap in 1min 03.130sec to outstrip Hamilton by 0.019 seconds as Mercedes reeled off their third front row lockout of the season.

Four-time champion Sebastian Vettel of Ferrari claimed third with a late fast lap in the final minute to push his team-mate Kimi Raikkonen down to fourth.

Carlos Sainz was ninth ahead of his Renault team-mate Nico Hulkenberg.

"Nothing amazing, no need to be a hero in Turn One and then I can go for it. I can guarantee I am more hungry to win than anyone now, so I am ready for it.

"The car felt so good. I knew there was a tenth to improve in for the last run and I managed to find it and apparently I needed it!"

He did -- as Hamilton pushed him to the limit.

"Not too bad," said Hamilton. "I am happy. Valtteri did a stunning lap with the first run and I made a bit of a mistake - I'm happy with the second run and it is a good result for the team."

Vettel said: "It wasn't easy to put it together and I had a mistake on the first lap. I knew I had to put in a banker lap to make it safe and qualify in a proper position - and I think we have a good chance in the race."

On a near-perfect summer's afternoon in the Styrian Alps, the air temperature was 24 degrees and the track 34 Celsius as qualifying began with forecasts warning of a 40 per cent chance of rain.

After being out-paced by Vettel by 0.029 seconds in the morning's final free session, Hamilton was keen to regain the initiative on a circuit where Mercedes have dominated, winning every one of the four races since it returned to the calendar.

In Q1, he led the way ahead of team-mate Bottas, who won last year's race, Raikkonen and Grosjean with Vettel content to be fifth behind Verstappen.

Bottas and Hamilton immediately did record-breaking laps in Q2 to lead Vettel by almost two-tenths on their first runs.

They all chose ultra-softs for their second runs, Vettel improving to go top, but Mercedes not troubling the scorer in second and third as Esteban Ocon, Pierre Gasly, Charles Leclerc, who will be taking a grid penalty for a new gearbox in his Sauber, Fernando Alonso and Stroll missed the top-ten shootout.

As Ricciardo led the way in Q3, Vettel was reported to the stewards for an incident in Q2 in which it was claimed, by Sainz, that the German had baulked him dangerously.

On track, Bottas made the most of scruffy first laps by Hamilton and Vettel to go fastest early before the final drama.