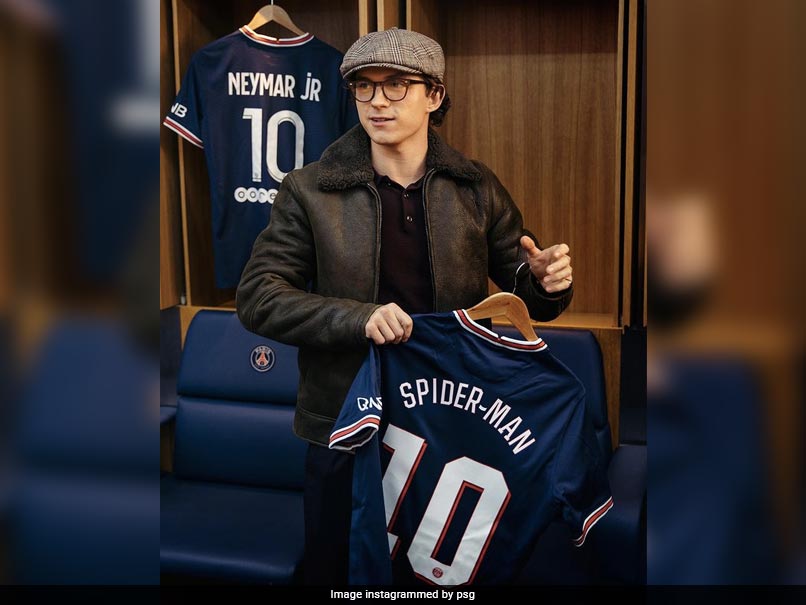 With 'Spider-Man: No Way Home' set to release on December 16, actor Tom Holland visited Paris Saint-Germain's (PSG) Parc des Princes stadium to promote his upcoming movie. Fully dressed in the Spider-Man costume, Holland took photos in the stadium and also in the PSG dressing room with jerseys of Lionel Messi and Neymar in the background. The Hollywood star was also present during the Ballon d'Or ceremony in Paris to promote his movie and was left awestruck while meeting Messi. The Ligue 1 outfit also gifted a jersey to the actor. To give fans a sneak peek into Spider-Man's visit, the club took to Instagram to share some photos. Here are the pictures:

PSG are currently on top of the Ligue 1 table with 42 points from 17 matches. Rennes are in second position with 31 points with Marseille (29) in third and Montpellier (28) in the fourth spot.

In the UEFA Champions League, PSG have qualified for the Round of 16 this season after having finished second in Group A, behind Manchester City.

The French outfit will be eyeing the Champions League title this season after having bought Lionel Messi during the summer transfer window. Messi left Barcelona on a free transfer after financial complications prevented him from signing a contract extension with the Catalan giants.

Meanwhile, 'Spider-Man: No Way Home' is a sequel to 'Spider-Man: Homecoming' (2017) and 'Spider-Man: Far From Home' (2019). It is also the 27th movie in the Marvel Cinematic Universe. Other than Holland, the movie will feature the likes of Zendaya, Benedict Cumberbatch, Jamie Foxx, Willem Dafoe and Benedict Wong.

Lionel Messi Neymar Kylian Mbappe Football
Get the latest updates on ICC Women's Cricket World Cup 2022 and IPL 2022, check out the Schedule , Live Score and IPL Points Table. Like us on Facebook or follow us on Twitter for more sports updates. You can also download the NDTV Cricket app for Android or iOS.