Real Madrid breathed a sigh of relief, their opening win secured having kicked off the season with a goalless draw away at Real Sociedad last weekend. 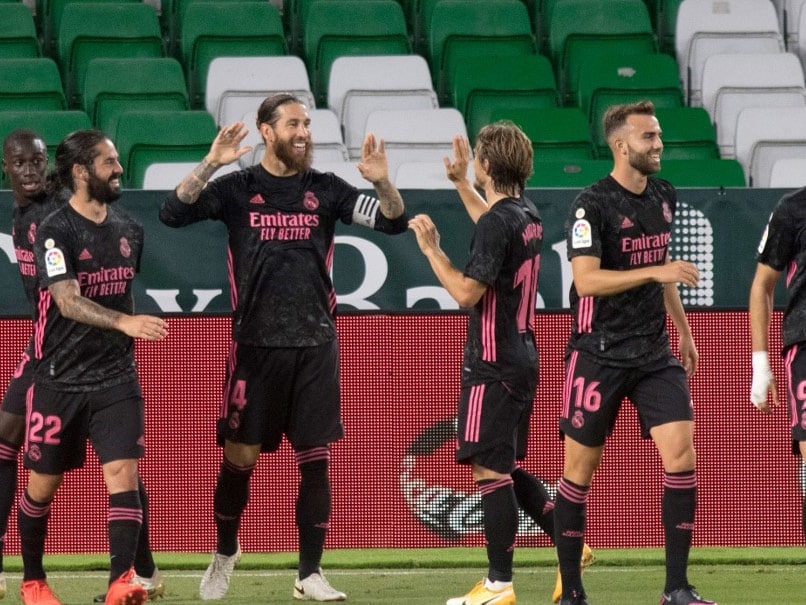 Sergio Ramos scored a late penalty as Real Madrid came from behind to scrape a 3-2 win vs Real Betis.© AFP

Sergio Ramos scored a late penalty as Real Madrid came from behind to scrape a 3-2 win against 10-man Real Betis, their first La Liga victory of the season. Betis were ahead at half-time after two goals in two minutes from Aissa Mandi and William Carvalho overturned Fede Valverde's opener for the reigning champions. But Betis defender Emerson, who is on loan from Barcelona, endured a nightmare start to the second half by scoring an own-goal and then being sent off for knocking over Luka Jovic after the striker had been sent clear.

VAR again intervened in Madrid's favour in the 82nd minute as Marc Bartra was adjudged to have cleared with his arm, leaving Ramos to chip in the winning penalty.

Betis were fuming at referee Ricard de Burgos at full-time and while the red card seemed fair, they were unlucky to concede the penalty, with Bartra seemingly nudged into the ball by Madrid's Borja Mayoral.

Madrid, though, breathed a sigh of relief, their opening win secured having kicked off the season with a goalless draw away at Real Sociedad last weekend.

"I'm not getting into the referees," said Zidane. "We suffered of course but in the end we got the three points."

Ramos converting from the spot felt familiar after his three penalties during Madrid's run to the title last term but this was an uncharacteristically sloppy defensive display from Zinedine Zidane's side.

It was the first time they had conceded twice in the first half of a league match since Zidane returned as coach 18 months ago and it would have cost them had their opponents been less generous.

Defeat for Betis ends what had been a perfect start under new coach Manuel Pellegrini, after two wins out of two against Alaves and Real Valladolid.

"From Madrid's first goal to the end of the first half we were much superior," said Mandi. "But we weren't able to get a clean sheet in the second half."

Victory for Madrid puts early pressure on Barcelona, who begin with Lionel Messi back in the fold at home to Villarreal on Sunday. Atletico Madrid also play their first game on Sunday at home to Granada.

Eden Hazard was still absent in Seville, not even included on the bench as Zidane continues to insist the Belgian regain full fitness before returning to action.

Jovic was given a rare start up front but the Serb missed a good chance before going off in the second half and it would not be a surprise if he departed before the end of the transfer window.

Benzema made Madrid's opener, refusing to give in down the right, where he wriggled into space and crossed for Valverde to fire in at the near post.

Ramos should have made it two but lashed wide from eight yards out and then Betis found their rhythm, exerting more and more pressure as the half wore on.

They equalised when Mandi climbed above Casemiro to head in a cross from the excellent Sergio Canales, who then initiated a second two minutes later, spreading left to Nabil Fekir, who laid off for Carvalho to power through and drive home.

But Madrid were level three minutes after the restart as Emerson poked Carvajal's cross into his own net and then the Betis defender was sent off, ajudged to have bundled into the back of Jovic, who had been put through by Benzema.

Ramos bent the free-kick wide, Benzema feathered past the post and substitute Borja scuffed a finish, only for De Burgos to review and decide the stumbling Bartra had diverted the ball away with his arm. Ramos made no mistake.

Valencia's poor start to the season under new coach Javi Gracia continued as they were held earlier to a 1-1 draw by newly-promoted Huesca. Real Sociedad eased past Elche 3-0 while it finished goalless between Alaves and Getafe.

Sergio Ramos Football
Get the latest updates on IPL 2021, check out the IPL 2021 Schedule and Indian Premier League Live Score . Like us on Facebook or follow us on Twitter for more sports updates. You can also download the NDTV Cricket app for Android or iOS.