Manchester City initially feared that De Bruyne would be out of action until late November. 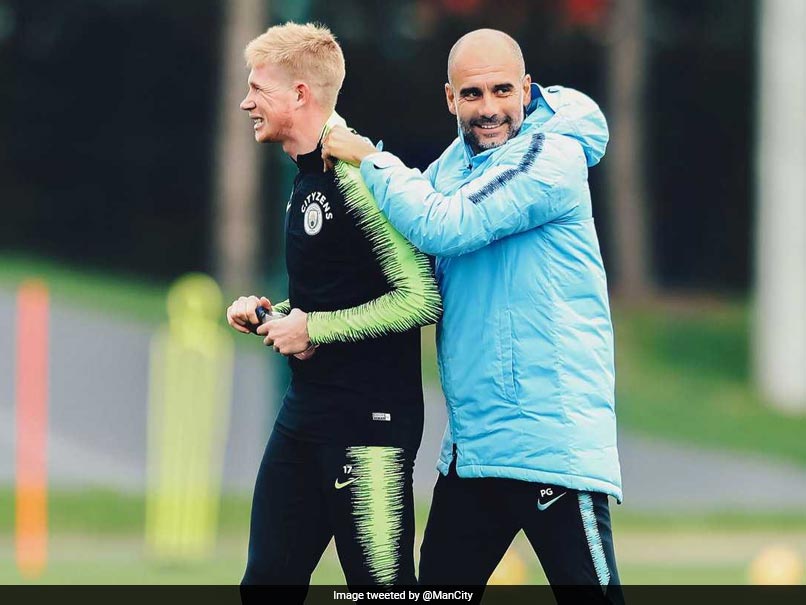 Kevin de Bruyne is in contention to make his return from injury.© AFP

Kevin de Bruyne is in contention to make his return from injury when Manchester City host Burnley on Saturday, City boss Pep Guardiola has confirmed. The Belgian has made just one substitute appearance this season after suffering a knee injury in training on August 15. City initially feared that De Bruyne would be out of action until late November, but has good progress and returned to training prior to a 0-0 draw at Liverpool before the international break.

Guardiola decided against rushing City's player of the year back for that top-of-the-table clash.

However, he could be eased in from the bench against Burnley with one eye on a more prominent role for the trip to Tottenham in the Premier League on October 29.

"I don't know if he's able to play 90 minutes but he has trained really well over the past two weeks, with no pain and ready to be part of the group," said Guardiola.

"He's so important for us. When a player is out, I like it when they're back to make us stronger. (There is) no doubt how important he is for us."

Saturday's match will see Joe Hart return to City to play for the first time since his 12-year association with the club ended in August, when he moved to Burnley for £3.5 million.

The England goalkeeper was part of the City team who ended their 35-year wait for a trophy by winning the FA Cup in 2011, before securing their first league title since 1968 a year later.

He was also part of the team who regained the Premier League title in 2014, but fell out of favour when Guardiola arrived as manager in 2016, as first Claudio Bravo and then Ederson were brought in as first choice.

"I think there is no doubt how important he was and is. Tomorrow you will see how people appreciate what he has done for this club," added Guardiola.

"What this club has become is because the people from Abu Dhabi helped to build something special with the facilities.

"But after it's down to the quality of the players in those 10 years. Joe is part of that, no doubt about it."

Guardiola, meanwhile, insisted he has no regrets in letting Jadon Sancho leave the Etihad.

Sancho, 18, made his England debut in last week's Nations League draw in Croatia, 14 months after leaving City to join Borussia Dortmund for £8 million.

The winger rejected a contract offer from City because he was worried he would not get enough playing time, but Guardiola said the club did all they could to keep him and doesn't believe Sancho will return in a big money move.

"We know what we have done with Jadon. We did absolutely everything and he decided to move on to Germany so all the best," added Guardiola.

Manchester City Kevin De Bruyne Football
Get the latest updates on India vs South Africa and check out  Schedule, Results and Live Score. Like us on Facebook or follow us on Twitter for more sports updates. You can also download the NDTV Cricket app for Android or iOS.