Winning the Europa League also offers Arsenal and Chelsea the safety net of Champions League qualification should they fail to make the top four in the Premier League. 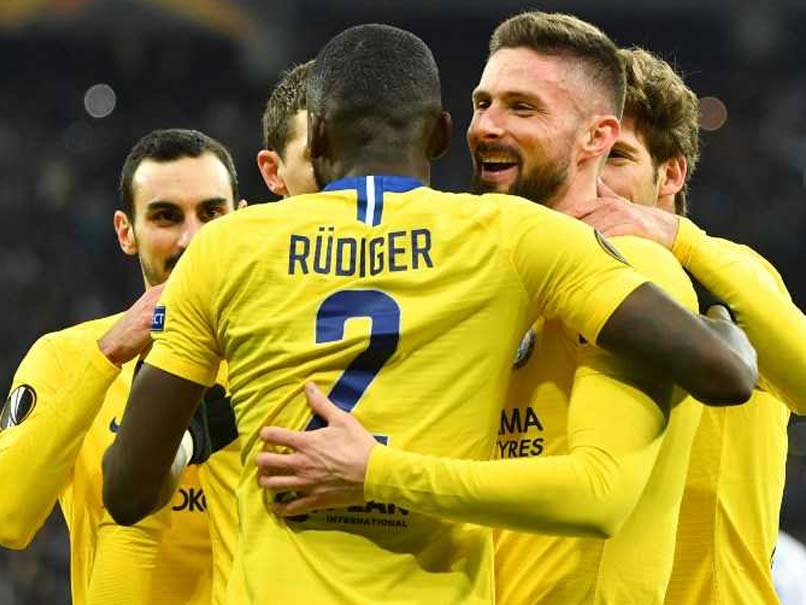 Pierre-Emerick Aubameyang spearheaded Arsenal's revival by scoring twice in a 3-0 win over Rennes to reach the Europa League quarter-finals 4-3 on aggregate, as Chelsea and Napoli also booked a last-eight spot on Thursday. The Gunners cancelled out their 3-1 deficit from last week's first leg in France inside 15 minutes as Aubameyang swept home from close range before teeing up Ainsley Maitland-Niles to head home.

However, Rennes had cause to complain as Aubameyang should have been flagged offside before the second goal.

With VAR not in use for the Europa League unlike the Champions League, there was no recourse for Rennes and the Ligue 1 side will also reflect on missed opportunities after the break as a historic European run for the club came to an end.

Winning the Europa League also offers Arsenal and Chelsea the safety net of Champions League qualification should they fail to make the top four in the Premier League.

But Arsenal boss Unai Emery, who won the Europa League three times as Sevilla coach, also wants the glory of a trophy in his first season in charge.

Chelsea cruised into the last eight with greater ease as six Premier League sides will take their place in Friday's quarter-finals draws with Manchester City, Manchester United, Liverpool and Tottenham in the last eight of the Champions League.

After a 3-0 victory in last week's last 16, first leg at Stamford Bridge, Chelsea were even more dominant in Kiev as Olivier Giroud scored his first hat-trick for the club.

"We started very well. We wanted to start in this way," Chelsea manager Maurizio Sarri told BT Sport. "We played a wonderful first half and managed the game in the second half."

Giroud, who is yet to start in the Premier League in 2019 after the signing of Gonzalo Higuain, netted a first-half double, before Marcos Alonso slid home a third on the stroke of half-time.

Five-time winners Sevilla were beaten 4-3 after extra time to lose a thrilling tie against Slavia Prague 6-5 on aggregate.

Twice the Spanish side came from behind to take the tie to extra time thanks to goals from Wissam Ben Yedder and Munir El-Haddadi.

However, after Franco Vazquez had given Sevilla a 3-2 lead on the night, Slavia hit back and Ibrahim Traore's winner a minute from time sealed a famous win for the Czechs.

Napoli wrapped up a 4-3 aggregate victory over last season's semi-finalists Salzburg despite a 3-1 second-leg loss in Austria.

Another Serie A giant fell, though, as the highly-rated Luka Jovic scored the only goal of the night and the tie as Eintracht Frankfurt beat Inter Milan at the San Siro.

Russian outfit Krasnodar suffered heartbreak as Goncalo Guedes scored a dramatic injury-time equaliser to send Valencia through 3-2 on aggregate after a 1-1 second-leg draw.

Spanish sides have dominated this competition in recent years and despite Sevilla's defeat will have two representatives in the last eight as Villarreal beat Zenit St Petersburg 2-1 to seal a resounding 5-2 aggregate victory.

Benfica, runners-up in 2013 and 2014, were also taken to extra-time by Dinamo Zagreb but eventually overturned a 1-0 first leg deficit with a 3-0 win in Lisbon.

Arsenal Dynamo Kiev Football
Get the latest updates on Fifa Worldcup 2022 and check out  Fifa World Cup Schedule, Stats and Live Cricket Score. Like us on Facebook or follow us on Twitter for more sports updates. You can also download the NDTV Cricket app for Android or iOS.