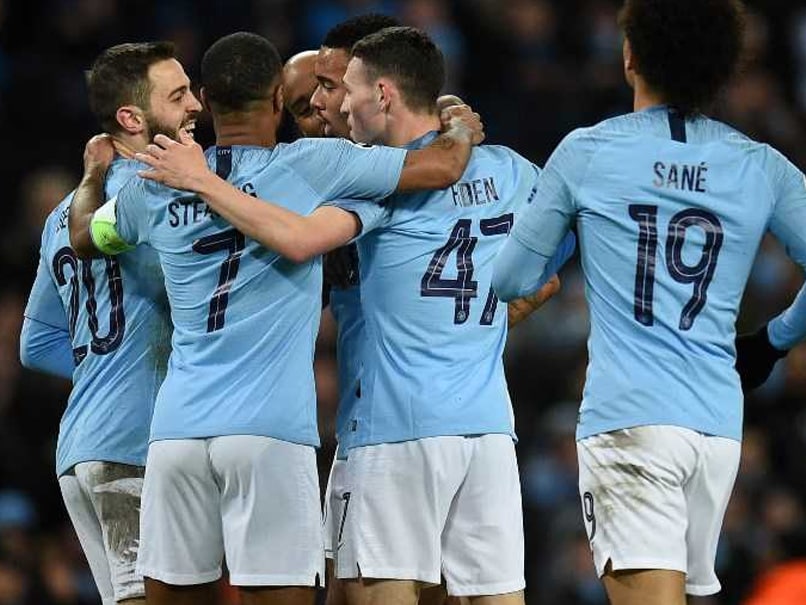 Pep Guardiola says Manchester City don't fear any team in the Champions League after they powered into the quarter-finals with a 7-0 rout of hapless Schalke on Tuesday. City had snatched two late goals to win the first leg 3-2 and they made the most of that fightback with a ruthless demolition job at the Etihad Stadium to clinch a 10-2 last-16 aggregate victory. Sergio Aguero's penalty opened the scoring in the 35th minute and the Argentine forward netted again soon afterwards before Leroy Sane, who also contributed three assists, struck against his former club.

Guardiola's side, who lifted the League Cup in February, remain on course for an unprecedented quadruple, sitting one point ahead of Liverpool at the top of the Premier League before this weekend's FA Cup quarter-final at Swansea.

"After the first goal we played at a good level. We were serious and we did the job," Pep Guardiola said.

"In the last 15 minutes of the first half and in the second half we were incredible. We were playing quick, dynamic in the transitions and we scored goals."

This emphatic victory was the joint-biggest ever Champions League knockout stage win but won't linger long in the memory given Schalke's total lack of resistence.

Twice a Champions League winner as Barcelona boss, Guardiola claimed this week that City are "teenagers" in the competition compared to the more established European powers.

They have never won the Champions League, with their best performance a semi-final appearance in 2016 under Guardiola's predecessor Manuel Pellegrini.

But City are one of the favourites to claim the trophy after Real Madrid and Paris Saint Germain crashed out and, on this evidence, Guardiola's players are up for the challenge of showing they are more mature than he believes.

"When I say we are a teenager team it doesn't mean we are not going to fight," Guardiola said.

"The 'teenagers' have passion and desire, they are not scared. We are going to try.

"I won it twice but I lost seven times. People say you have to win (the trophy), but in one game you can lose against these incredible top sides. We will see how far we will get."

Amid reports he is in danger of being sacked, Schalke boss Domenico Tedesco admitted it was the worst result of his reign.

"I'm extremely disappointed. We fell apart. It was the worst we've had here since I was coach," he said.

"Of course it hurts. It's difficult when you lose 7-0 to stand here. The next couple of weeks are going to be difficult."

Guardiola's men monopolised possession and their territorial dominance finally paid off 10 minutes before the break.

Ilkay Gundogan clipped a pass into the Schalke penalty area and Jeffrey Bruma bundled over Bernardo, with the spot-kick awarded after being checked by VAR.

Aguero stepped up to nonchalantly chip the penalty down the middle as Ralf Fahrmann dived the wrong way.

That opened the floodgates as Aguero quickly put the result beyond doubt three minutes later.

Sterling was the provider as he raced onto Gundogan's pass and pulled the ball back to Aguero, who squeezed his shot past Fahrmann from a tight angle for his 27th goal of the season.

An interminable VAR delay of several minutes while Sterling was confirmed as onside drew more boos from City fans.

But they were celebrating again in the 42nd minute.

This time it was Sane who ripped open the shambolic Schalke defence, the German winger sent clear on goal by Oleksandr Zinchenko before driving a clinical strike into the far corner.

City were streets ahead of Schalke in every phase of the game and Sterling maintained his sublime form with a cool finish from Sane's majestic pass in the 56th minute.

Bernardo made it five in the 71st minute, netting with a first-time shot from Sane's pass.

There was still time for Foden to bag his first Champions League goal as the young midfielder took Sane's pass and slotted home in the 78th minute.

FC Schalke 04 Football
Get the latest updates on ICC T20 Worldcup 2022, check out the Schedule and Live Score. Like us on Facebook or follow us on Twitter for more sports updates. You can also download the NDTV Cricket app for Android or iOS.