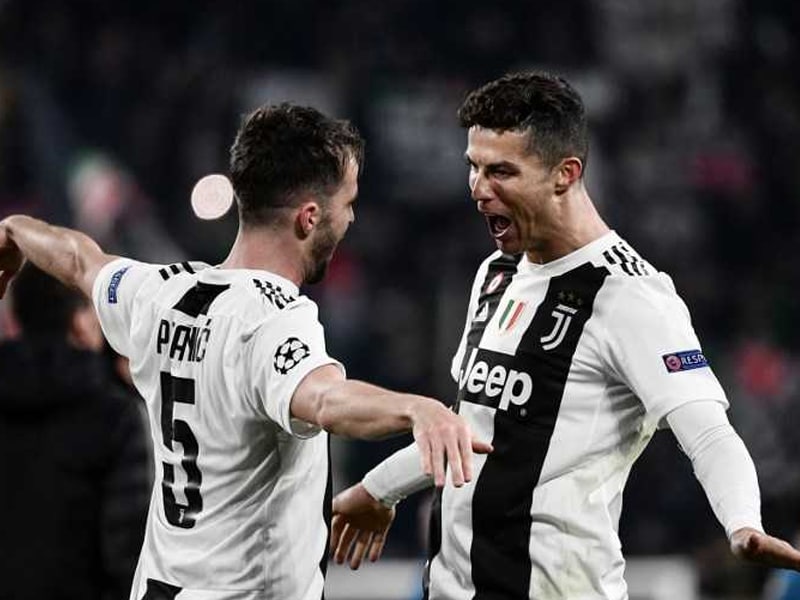 Cristiano Ronaldo has joined Lionel Messi with the most Champions League hat-tricks, on eight.© AFP

Cristiano Ronaldo lifted Juventus into the Champions League quarter-finals on Tuesday with a spectacular hat-trick, and then goaded his old enemy Atletico Madrid by mimicking Diego Simeone's crotch-grabbing celebration on front of the Spanish fans. The 34-year-old Portuguese superstar scored two headers and a late penalty to clinch a place in Friday's last-eight draw with a dominant display and 3-2 aggregate victory by the Italian champions in Turin.

After scoring the decisive penalty four minutes from time, Ronaldo turned towards the Atletico fans and replicated Simeone's gesture after the Spaniards' 2-0 first leg win by grasping his genitals and thrusting out his groin.

"Cristiano Ronaldo is the best in the world, he can put in these performances on big nights," added the Argentinian coach.

Two of his five Champions League titles, in 2014 and 2016, have also been won by beating Atletico in the finals.

He scored the title-winning penalty against Atletico in 2016 and a hat-trick against them in the last four a year later.

"In the history of Juve there was never a comeback like this," said Ronaldo.

"That's why Juventus bought me, to help them in games like this. I do my job and I'm very happy, it was a magical evening."

Juventus signed Ronaldo last summer from Real Madrid for 100 million euros ($117 million) hoping he would make the difference on the continent. The Italian title-holders have not won the Champions League since 1996, and have finished runners-up twice in the past four seasons.

"It had to be a special night and it was, not just for the goals, but for the team and their incredible attitude," continued the five-time Ballon d'Or winner.

"This is the mentality you need in the Champions League and we are on the right track.

"It's too early to talk about the final, let's take it one step at a time.

"Atletico was a complicated team to face, but we are also strong and we deserved to go through."

Ronaldo has joined Barcelona's Lionel Messi with the most Champions League hat-tricks, on eight.

The Portuguese has been directly involved in 77 goals in 77 Champions League knockout appearances -- 63 goals and 14 assists.

He has scored 124 goals in the Champions League, more than Atletico in the competition (118).

The top scorer in the Champions League for the last six seasons, he has now scored four in this year's competition.

"It would have been strange for Ronaldo to finish the Champions League with just one goal," said Juventus coach Massimiliano Allegri.

"It was a superb match tonight, with a wonderful public. The players gave a great night of football to the Italian public."