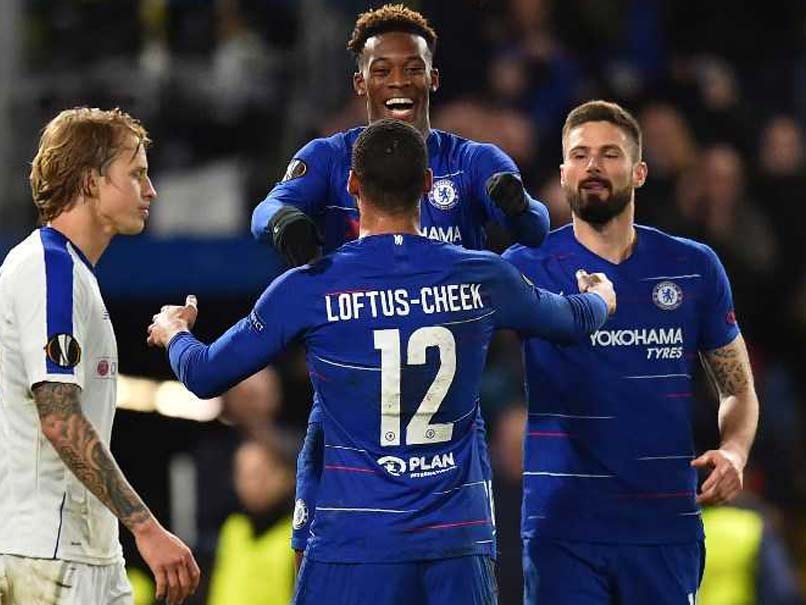 Chelsea dominated Dynamo Kiev to take control of their Europa League last-16 tie as goals from Pedro Rodriguez, Willian and Callum Hudson-Odoi earned the hosts a 3-0 win at Stamford Bridge on Thursday. The Londoners may well need to win the competition to ensure a return to the Champions League next season as they sit sixth in the Premier League, and justified their tag as tournament favourites against the Ukrainians. Pedro turned home an intricate backheel from Olivier Giroud to open the scoring on 17 minutes and only some wayward finishing and fine goalkeeping from Denys Boyko kept Kiev in the game before the break.

However, Willian's sweet free-kick and substitute Hudson-Odoi's late third gave the scoreline a fairer reflection of the 90 minutes.

"We could have scored more, especially in the first half, but the result is a good result," said Chelsea manager Maurizio Sarri.

"We were able not to concede a goal at home, which is very important in this competition.

"We have to go there with a very good level of attention and application if we want to qualify."

A third straight victory maintains Chelsea's momentum and a much-needed turnaround from Sarri, who seemed on the verge of the sack just a few weeks ago.

The Italian left Eden Hazard, N'Golo Kante and Gonzalo Higuain on the bench among six changes, but Chelsea still had far too much quality for the visitors to handle early on.

Pedro took his first clear chance by prodding through Boyko's legs, however the Spaniard should have had plenty more to show for his night's performance.

'Have to be more clinical'

The former Barcelona winger side-footed a gilt-edged chance straight into Boyko's arms moments later before the Kiev 'keeper flew to his right to deny Pedro once more after he was picked out perfectly by a raking David Luiz pass.

Sarri's side finally had the breathing space they craved 25 minutes from time when Willian curled a wonderful free-kick into the top corner.

"The first half could have been 3-0 - we have to be more clinical in these kind of games," said Willian.

"We cannot miss chances like we missed in the first half, but we did the job well."

Sarri's decision to leave English duo Ruben Loftus-Cheek and Hudson-Odoi on the bench once more frustrated many of the home supporters.

The limited use of Hudson-Odoi in particular has gained plenty of attention since Chelsea rebuffed strong interest from Bayern Munich in the January transfer window for the 18-year-old.

And Hudson-Odoi showed what he is capable of with a calm finish from Loftus-Cheek's pass a minute from time for a third goal that should see the 2013 winners of this competition comfortably through.

"The third goal for us is really very important. 3-0 is an important result, but of course we have to play the second leg so we have to be careful," added Sarri.

"Hudson-Odoi is a very important player but I think he is 18 and needs to improve.

"I don't like if the press or the fans put too much pressure on him because at the moment he has to think only to improve. It is impossible to be at the top at 18 years."

Chelsea Dynamo Kiev Willian Football
Get the latest updates on ICC T20 Worldcup 2022, check out the Schedule and Live Score. Like us on Facebook or follow us on Twitter for more sports updates. You can also download the NDTV Cricket app for Android or iOS.