Casillas' relationship with coach Jose Mourinho has reportedly deteriorated with rumours that he and Sergio Ramos told club president Florentino Perez that several players would ask for a transfer if Mourinho was at the club next season. 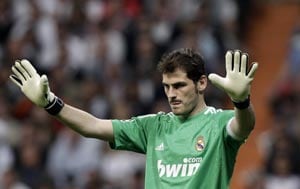 Real Madrid captain and goalkeeper Iker Casillas says he has no intention of abandoning the club.

Casillas has had to settle for a place on the substitutes' bench since recovering from a broken bone in his left hand which he suffered in the quarterfinals of the Copa del Rey at the end of January, reports Xinhua.

The injury suffered by the Spanish international saw the club purchase Diego Lopez from Sevilla and the former Madrid player, who left the club to seek his chance for first team football, has turned in a string of fine performances which have left Casillas watching his side's games from the substitutes' bench.

It should also be said that Casillas' relationship with coach Jose Mourinho has deteriorated with rumours he and Sergio Ramos told club president Florentino Perez that several players would ask for a transfer if Mourinho was at the club next season while his journalist girlfriend Sara Carbonero commented on Mexican TV that some relationships in the Madrid dressing room were not all they should be.

Mourinho dropped a massive hint after Madrid's exit from the Champions League at the hands of Borussia Dortmund on Tuesday night that he would be leaving the club at the end of the season and perhaps that had some bearing on Casillas, who spoke when receiving a merit award from the Communidad de Madrid this Thursday.

"My future is with Real Madrid because I have a contract, because I have been with the club since I was nine-years-old, because it is the club I have always supported and because it is where I want to be," said Casillas, who insisted his companions were not going to give up, despite being 11 points behind Barcelona in the league and out of Europe.

"We have to get as many points as possible in the league and try to beat Atletico Madrid in the Copa del Rey."

Casillas insisted the Madrid side had done as much as possible in their game against Borussia Tuesday; a game in which they were close to pulling off a miracle fightback but falling a goal short in a 3-4 aggregate defeat.

"They made an immense effort and I want to congratulate them all," he said.

Meanwhile, Thursday saw a group of fans insult Mourinho as he left Real Madrid's Valdebebas training ground after the morning training session, perhaps showing why the coach had commented he wanted to go to a place where he was 'loved'.

Comments
Topics mentioned in this article
Football Real Madrid Iker Casillas
Get the latest updates on ICC T20 Worldcup 2022 and CWG 2022 check out the Schedule, Live Score and Medals Tally. Like us on Facebook or follow us on Twitter for more sports updates. You can also download the NDTV Cricket app for Android or iOS.