Neymar, 21, had been in doubt for the game after a heavy fall in training, and he was hit with some tough challenges and constant close marking in front of a near-capacity crowd. 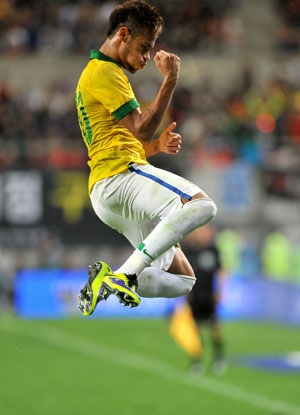 Brazil star Neymar weathered some harsh attention before scoring a stunning free-kick as he led the World Cup hosts to a 2-0 friendly win over South Korea on Saturday.

The Barcelona forward curled his shot past Korean goalie Jung Sung-Ryong just before half-time, with Chelsea's Oscar getting the visitors' second shortly after the break.

Neymar, 21, had been in doubt for the game after a heavy fall in training, and he was hit with some tough challenges and constant close marking in front of a near-capacity crowd.

But the young idol had the last laugh at Seoul World Cup Stadium when he thumped his strike over the wall and to the right of Jung, who got a hand to the ball but could not keep it out.

Neymar was targeted from start to finish as Hong Myung-Bo's team, already qualified for next year's World Cup, opted for tactics of harassment and frustration.

The Brazilian threw up his hands in exasperation and had a few testy moments with other players, even getting into a shoving match near the team benches late in the first half.

"In the first half, they had twice as many fouls as we had. I think they were fouling too much early on."

"Some of our players are still young and I think they will learn from this experience," said Hong, who has just one victory in seven matches since taking over in June.

"I am sure they gained confidence from this, and it's an important part of our team. That alone is a major plus for us."

After a tepid start to the game, Neymar took the ball in midfield and danced through defenders before threading a pass to Oscar, whose shot travelled over the bar.

But after being brought down for the umpteenth time, Neymar took matters into his own hands as he opened the scoring with his free kick.

Brazil doubled their lead just three minutes into the second half. Paulinho put Oscar through and the midfielder went past the helpless Jung before putting it into the gaping net.

South Korea brought on Son Heung-Min in the 65th minute, hoping the Bayer Leverkusen winger could add some spark to the lethargic attack.

And the home side were more lively in the last half-hour, with Lee Chung-Yong heading a corner wide in the 68th minute.

It was as close as South Korea came to scoring, as the five-time World Cup champions outclassed the hosts.

South Korea will next host Mali on Tuesday, while Brazil will take on Zambia on the same day in Beijing.

Comments
Topics mentioned in this article
Football Uruguay Brazil
Get the latest updates on ICC T20 Worldcup 2022 and CWG 2022 check out the Schedule, Live Score and Medals Tally. Like us on Facebook or follow us on Twitter for more sports updates. You can also download the NDTV Cricket app for Android or iOS.