Neymar was one of five players sent off after a mass brawl at the end of PSG's 0-1 loss to Marseille in Ligue 1. 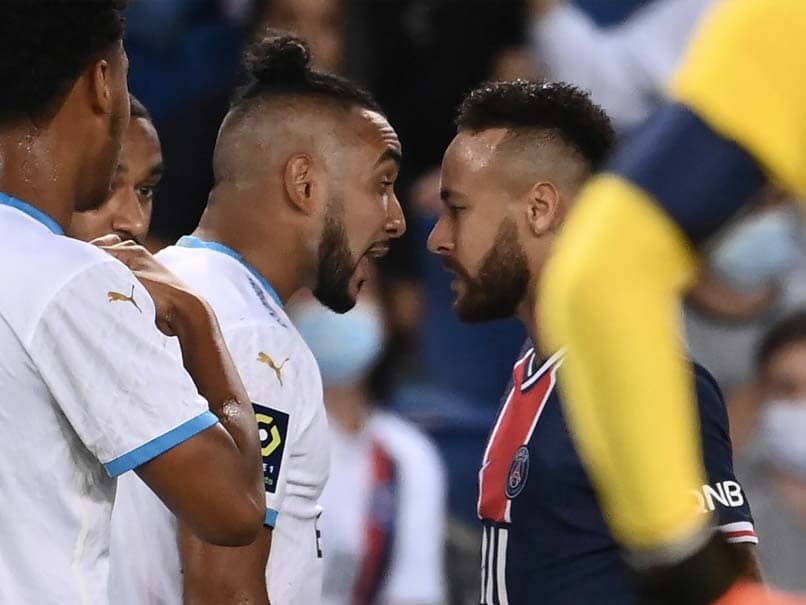 Neymar said he "acted like a fool" following his red card against Marseille.© AFP

Neymar said he "acted like a fool" following his red card against Marseille but called on football officials to do more to combat discrimination after accusing Spanish defender Alvaro Gonzalez of racism. The Brazil forward was one of five players sent off after a mass brawl at the end of PSG's 1-0 loss in Ligue 1 on Sunday, and later claimed Gonzalez had called him a "monkey" in a series of furious tweets. PSG have stood by the world's most expensive player, saying the club "strongly supports" him, but Neymar conceded he would accept his punishment which is expected to be revealed by the French league's disciplinary commission on Wednesday.

"Yesterday I revolted. I was punished with red because I wanted to hit someone who offended me," Neymar said in a lengthy Instagram post Monday.

"I thought I could not leave without doing something because I realised that those in charge would not do anything, did not notice or ignored the fact."

Neymar was dismissed for slapping Gonzalez on the back of the head, with team-mates Layvin Kurzawa and Leandro Paredes also sent off, as well as Marseille's Dario Benedetto and Jordan Amavi.

"In our sport, aggressions, insults, swearing are part of the game, of the dispute. You can't be affectionate. I understand this guy partly, all is part of the game, but racism and intolerance are unacceptable," Neymar continued.

"Should I have ignored it? I don't know yet... Today, with a cool head, I say yes, but in due course, my companions and I asked the referees for help and we were ignored.

"I accept my punishment because I should have followed the path of clean football. I hope, on the other hand, that the offender will also be punished.

"Racism exists. It exists, but we have to stop it. No more. Enough!"

"The guy was a fool. I also acted like a fool for letting me get involved in that," he added.

PSG have lost their opening two games of the season for the first time since 1984/85, and face another spell without Neymar whose first two seasons in France were marred by injuries.

They host Metz on Metz on Wednesday in what was originally scheduled to be their Ligue 1 season opener.

Meanwhile, Marseille issued a statement of their own defending Gonzalez. He denied racism and accused Neymar of being a bad loser.

"Alvaro Gonzalez is not racist. He has shown us that by his daily behaviour since joining the club, as his team-mates have already testified," the statement read.

The league's disciplinary commission, which will decide the punishments, could investigate Neymar's accusations against Gonzalez, who Marseille claim was spat on by Angel Di Maria.

Marseille pledged to "fully cooperate" with any investigation and said the club would remain at the disposal of the commission.

Any racist behaviour carries a maximum suspension of 10 matches.

Spitting directed at another player can lead to a ban of up to six matches.

Kurzawa meanwhile could be suspended for up to seven matches for violent conduct after aiming a punch at opposition full-back Amavi.

Marseille Neymar Football
Get the latest updates on India vs England Series, India vs England , live score and IPL 2021 Auction . Like us on Facebook or follow us on Twitter for more sports updates. You can also download the NDTV Cricket app for Android or iOS.