PSG's defeat to Marseille in the Ligue 1 was marred by an ugly mass brawl, where five players were sent off in injury time. 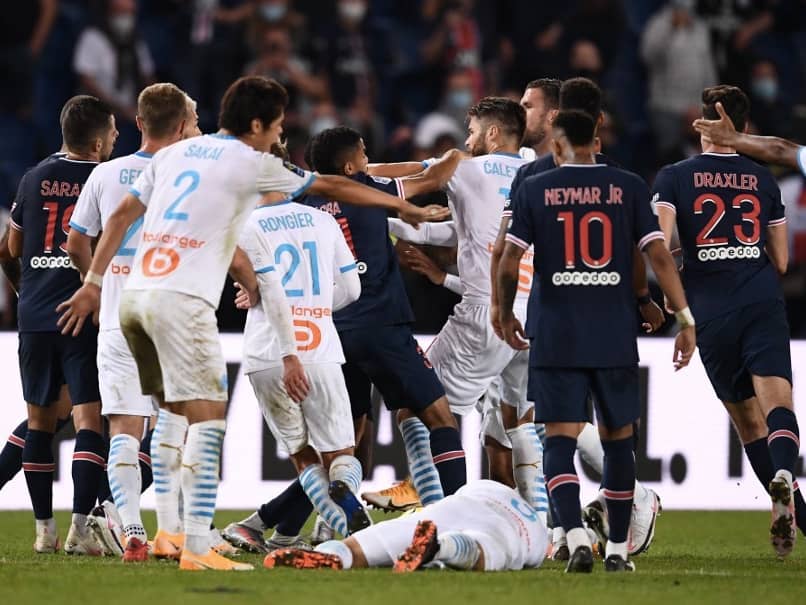 PSG and Marseille had a massive brawl in injury time of their Ligue 1 fixture.© AFP

Matches between Marseille and Paris Saint-Germain have never been short of controversies. The two Ligue 1 outfits have a history of bitter rivalry, which was quite evident in their recent league fixture, with Marseille coming out as 1-0 winners. Florian Thauvin scored the solitary goal at the Parc des Princes. The match was marred with a mass brawl in injury time, where referee Jerome Brisard had to show five red cards, including one to PSG and Brazilian superstar Neymar.

Here is the video of what happened:

Wondering how the 5 red cards in the PSG vs Marseille game came about? Watch

14 yellow cards and 5 red cards in the game, could've been more too!

Neymar also got a red

With the match going into the 96th-minute, the away side's captain Steven Mandanda took a long pause before taking a goal-kick and Neymar could be seen arguing with Alvaro Gonzalez.

The PSG attacker also accused Alvaro of racism. After the goal-kick, Argentinians Dario Benedetto and Leandro Paredes got into a tussle, which triggered the brawl. Paredes pushed Benedetto and also seemed to headbutt Alvaro.

Then, PSG's Layvin Kurzawa and Marseille's Jordan Amavi got into a fistfight. Benedetto and Paredes received their second yellow cards. Kurzawa and Amavi were awarded straight red cards. VAR also showed that Neymar had hit Alvaro, thereby also being sent off.

Soon after the match, Neymar tweeted, "VAR spotting my 'attack' is easy, Now I want to see it pick up the image of the racist calling me "MONO HIJO DE PUTA". That's what I want to see. And then? I do a rainbow flick, you punish me .. For a slap, I get sent off ... what about them? What then?"

This match was PSG's second consecutive defeat this season. After two matches, they are currently 18th in the 20-team table, and Marseille are fifth with two wins from two matches.

Marseille Steve Mandanda Leandro Paredes Football
Get the latest updates on IPL 2021, IPL Points Table , IPL Schedule 2021 , live score . Like us on Facebook or follow us on Twitter for more sports updates. You can also download the NDTV Cricket app for Android or iOS.