Foreign-born players can be inducted to national teams on grounds of residency but Wilshere feels it is rather unfair as it does not happen in other countries. 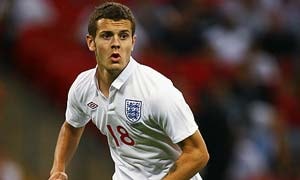 England midfielder Jack Wilshere has insisted only English players should represent the national side.

The Arsenal star's comments came as it emerged the national governing Football Association had looked into the eligibility of talented Manchester United forward Adnan Januzaj to play for England.

Belgium-born winger Januzaj can play for the country of his birth, Albania, Kosovo, Serbia and Turkey and the 18-year-old could represent England in 2018 on residency grounds if he remains in the country for the next five years.

However, Wilshere said: "The only people who should play for England are English people. If you live in England for five years it doesn't make you English.

"If I went to Spain and lived there for five years I am not going to play for Spain," he added ahead of England's key World Cup qualifier against Montenegro at Wembley on Friday.

But after kick-starting a national debate, Wilshere took to Twitter on Wednesday to insist he wasn't referring specifically to Januzaj.

"Just to clarify a few things....again! Seems to be a trend in this country, poor journalism in my eyes! I wasn't referring to Januzaj...," Wilshere said.

"The question was should foreign players be allowed to play for England, and in my opinion I don't think they should! He is a great player...

"I wish he was English! I'm sure most of you agree with me even if some journalists are trying to make me look bad....again!"

And in rugby union, Samoa-born Manu Tuilagi has represented both England and the British and Irish Lions after qualifying on residency grounds.

Football Association chairman Greg Dyke, speaking Wednesday, suggested Wilshere had gone too far in calling for England selection to be restricted only to English-born players.

"The idea that somebody who is not born in this country cannot play here is not real, but how long should they be here?," he said.

"But then you've got to look at what FIFA say, what are the FIFA rules on it?

"The FA are looking at what we think is appropriate and that is now what we are going through the process of."

Januzaj's youth means he is a far more enticing option than Spanish-born Mikel Arteta and native Italian goalkeeper Carlo Cudicini, both of whom have been linked with England after lengthy spells in the Premier League.

But Wilshere said having foreign-born players in the team risked diluting the essential character of the side.

"We have to remember what we are. We are English. We tackle hard, are tough on the pitch and are hard to beat.

Wilshere's pointed remarks about so-called "poor journalism" came after he was pictured with a cigarette in his hand following an Arsenal night out.

At first he said he was just holding it, before admitting he had been smoking and apologising to Gunners manager Arsene Wenger.

Comments
Topics mentioned in this article
Football Jack Wilshere Adnan Januzaj Wilfried Zaha Shinji Kagawa England Liverpool Manchester United
Get the latest Cricket news, check out the India cricket schedule, Cricket live score . Like us on Facebook or follow us on Twitter for more sports updates. You can also download the NDTV Cricket app for Android or iOS.