The best moment of the half came towards the fag end when youngster Dheeraj Singh proved his worth with a brilliant save. 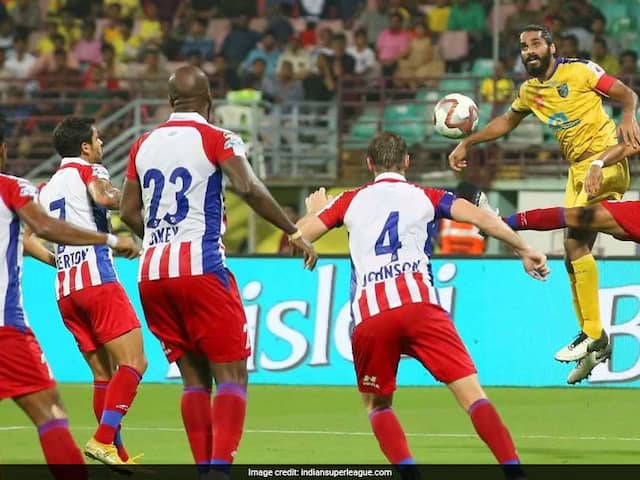 Kerala Blasters FC and ATK played out a thrilling 1-1 draw at the Jawaharlal Nehru Stadium in Kochi on Friday. Hosts Kerala Blasters and visitors ATK started the match on a cautious note, opting to keep the ball in midfield rather going for an attack. Neither side could muster any clear-cut chances in a opening half. New signing Edu Garcia was ATK's most threatening attacker of the half. His pace and trickery troubled Kerala's defence early on, nearly giving the away side the lead. From Kerala's end Seiminlen Doungel caused a few problems for the ATK defence with his clever runs inside the box.

However, Kerala's best chance fell to Matej Poplatnik in the 35th minute. The Slovenian's header ended just outside the far post, but goalkeeper Arindam Bhattacharja was not taking any chances as he saved it with ease.

The best moment of the half came towards the fag end when youngster Dheeraj Singh proved his worth with a brilliant save. Edu Garcia picked up the ball just outside the box, swivelled past Jhingan before executing a neat curling effort. Dheeraj was as alert as ever, as his outstretched hand prevented the ball from entering the top corner.

Kerala started imposing themselves in the second period and had a golden opportunity to take the lead a few minutes in when Slavisa Stojanovic had time and space in the penalty box to pick his spot. However, the Serbian rushed at the chance and ended up blazing over.

Kerala refused to sit back and continued piling the pressure on their opponents. A few minutes later, Poplatnik forced a smart save from Arindam with a stinging drive.

The onslaught from Kerala continued and they really should have taken the lead ahead of the last quarter. Sahal Abdul Samad did brilliantly well from the right-hand side of the penalty box before delivering an inch perfect ball to Doungel. With just the 'keeper to beat, the winger fluffed his lines as he could only find the side-netting.

Just as it seemed the tie would end goalless, Garcia produced a moment of individual brilliance completely against the run of play.

The Spaniard was awarded a free-kick in the 84th minute after being fouled just outside the box. His clever drive skimmed under the wall before creeping into the bottom corner.

However, Kerala would not take defeat and equalised almost immediately through Poplatnik. The Slovenian got on the end of a pin-point cross from Cyril Kali. His resulting header took a heavy deflection off Gerson Vieira before landing in the top corner.

With time not favouring either side, the match ended in a 1-1 draw, much to the annoyance of both sets of supporters.