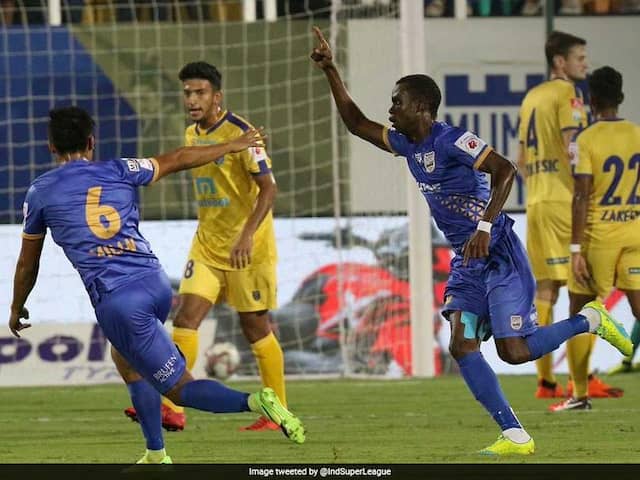 Mumbai City FC thrashed Kerala Blasters 6-1 in the Indian Super League at the Mumbai Football Arena on Sunday. Moudou Sougou was the star of the show, becoming the first player to score four goals in a match in ISL history (12', 15', 30', 90+4'). Rafael Bastos (70') and Matias Mirabaje (89') were the other scorers for Mumbai, while Kerala's consolation came from Seiminlen Doungel (27'). On the back of that sensational result, Mumbai inched to within three points of league leaders Bengaluru FC, while Kerala Blasters remained eighth.

The Islanders gave Kerala a taste what was to come right from the start as Sougou almost turned in a cross from Arnold Issoko in the very first minute.

But Sougou would taste success only in the 12th minute as the Kerala defence was caught ball watching. Paulo Machado received the ball on the left flank and sent in a peach of a cross which was turned home by a sliding Sougou.

Three minutes later, the Senegalese was at it again. This time, goalkeeper Dheeraj Singh was the culprit as his poor pass from the back fell to Raynier Fernandes, who passed it to Sougou. The striker went on to unleash a piledriver that flew into the net to double Mumbai's advantage.

A stunned Kerala Blasters tried to mount a response and got a goal back before the half an hour mark. After Sahal was dispossessed, the loose ball fell to Doungel on the edge of the box and the Kerala forward went on to beat Amrinder Singh with a shot that went in off the post.

However, any ray of hope that Kerala would have had was quickly extinguished. Sougou was not picked up inside the box once again and the striker headed in Subhasish Bose's cross from the left to make it 3-1 in the 30th minute.

Mumbai were in complete control by this time and Kerala's task was made even harder just before the half-time break as Zakeer Mundampara received a second yellow card for his challenge on Bastos and was sent off, reducing the Men in Yellow to 10 men.

The game slowed down at the start of the second half as Mumbai looked to frustrate their opponents.

Despite Kerala's intent, it were Mumbai who had all the clear-cut chances. Sougou could have added a couple more goals to his tally, while Amrinder was called into action by Courage Pekuson at the other end.

But Mumbai City went on to quell Kerala's challenge with two outrageous goals late on in the second half. In the 70th minute, Issoko broke forward on a run before losing the ball. It fell to Bastos who let a terrific strike fly from 35 yards which beat a diving Dheeraj all ends up.

Towards the end of regulation time, it was Matias Mirabaje's turn to wow the spectators with an incredible left-footed long ranger that beat the Kerala goalkeeper again.

In added time, there was time for another goal as Nemanja Lakic-Pesic's clearance fell to Sougou who had the simple task of rolling the ball in, with Dheeraj well off his line.

Kerala Blasters FC Football
Get the latest Cricket news, check out the India cricket schedule, Cricket live score . Like us on Facebook or follow us on Twitter for more sports updates. You can also download the NDTV Cricket app for Android or iOS.