The point preserves Bengaluru's three-point advantage at the top while Mumbai City are second with 21 points. 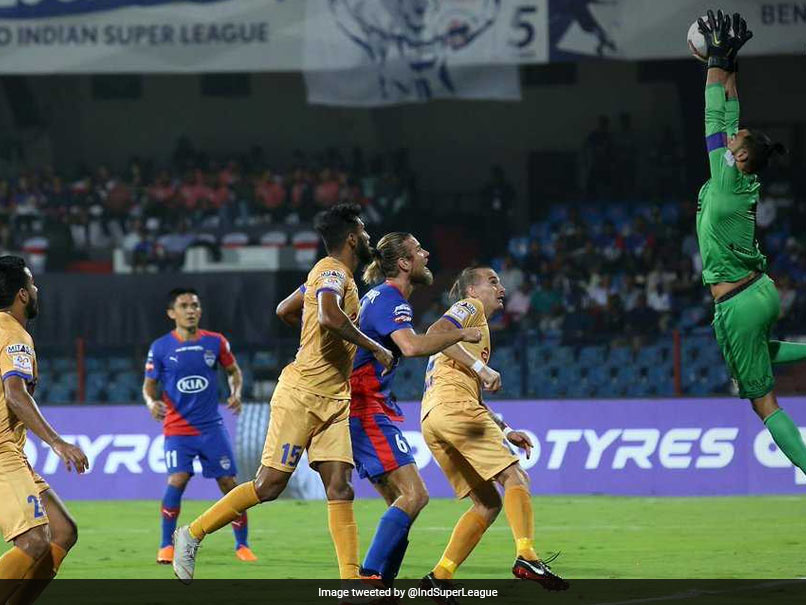 Bengaluru FC failed to capitalise on their numerical advantage as they were held to a 1-1 draw by 10-men Mumbai City FC in an engrossing Indian Super League battle at the Sree Kanteerava Stadium in Bengaluru on Sunday. In an end-to-end affair till the last minute, Udanta Singh gave Bengaluru the lead in the 23rd minute. Modou Sougou equalised in the 31st minute and the teams could not be separated for the remainder of the match as Bengaluru maintained their unbeaten record and Mumbai took their unbeaten streak to seven matches.

The point preserves Bengaluru's three-point advantage at the top while Mumbai City are second with 21 points.

Sunil Chhetri's vision to thread a through-ball into the box to pick out a clever run by Chencho Gyeltshen almost resulted in the hosts taking an early lead in the sixth minute.

The Bhutanese forward latched on to his captain's pass but drove a low shot across the face of goal that failed to test Mumbai custodian Amrinder Singh.

The hosts' intent in the final third helped them take the lead in the 23rd minute. Chencho Gyeltshen played a through ball to release Rahul Bheke into space down the left flank.

The full-back's cross found Udanta Singh perfectly positioned in the centre of the box and the Indian winger managed to beat the tall figure of Lucian Goian to a header into the net.

Mumbai City attempted to punish the home side's high line and Modou Sougou was tasked with exploiting the space behind the Bengaluru backline.

After three offside calls, Sougou's persistence paid off in the 31st minute. Arnold Issoko dribbled infield from the right flank and played a delightful cross into the centre for the Senegalese striker whose diving header left Gurpreet Singh rooted to the spot.

Gurpreet was troubled again in the 36th minute when Issoko produced another brilliant ball towards the far post. Nishu Kumar lost track of Rafael Bastos but the striker's header was well kept out by the Indian goalkeeper.

Bengaluru were in the ascendancy soon after the break. Substitute Xisco Hernandez found Sunil Chhetri in space just outside the box in the 49th minute and the striker's swerving strike that took a minor deflection off Goian forced an excellent finger-tip save from Amrinder Singh.

Mumbai were reduced to 10 men two minutes later. With the game on an equal footing, Sehnaj Singh's foolhardy challenge on Dimas Delgado at the halfway line was punished with a second yellow.

But despite the numerical disadvantage, Mumbai kept on pushing and in the 64th minute, quick footwork helped Rafael Bastos get the better of Albert Serran near the byline and tease a cross towards the near post where Sougou's header flew just wide.

The sending off did nothing to impact the pace of the game as both sides looked for a match-winning goal.

A scramble inside the box in the 73rd minute resulted in Xisco Hernandez finding the ball at his feet but the Spaniard's shot was saved by Amrinder. Erik Paartalu's header from the resulting corner-kick struck the crossbar and went out.

Despite frantic passages of play towards the end, there were no victors in what was a closely-fought tie.