Matej Poplatnik made the most of a deflection off Gerson's foot to nod home the first goal in the 77th minute. 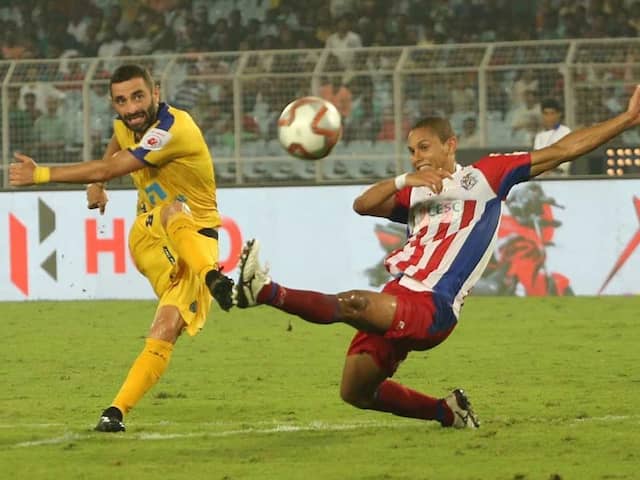 A dominant Kerala Blasters FC rode on second half strikes from Matej Poplatnik and Slavisa Stojanovic to beat ATK 0-2 in the Indian Super League (ISL) season five opener at the Vivekananda Yuba Bharati Krirangan here on Saturday. Poplatnik made the most of a deflection off Gerson's foot to nod home the first goal in the 77th minute with Stojanovic adding the cushion in the 86th minute after a barren first half which the away side bossed.

The result saw the two-time finalists kick off their campaign on a perfect note by logging full points while ATK, who endured a dismal run last season, got off to the worst possible start at home.

The home side looked rusty in the opening exchanges and were sloppy in possession.

Poplatnik almost took advantage when he rose to connect to a Lalruatthara cross from the left flank but dragged his header just wide of target.

The visitors were all over ATK as Lalruatthara time and again bombed forward to tee up Poplatnik, who was guilty of missing one more chance inside the first ten minutes.

Against the run of play, ATK had a sniff of goal when Manuel Lanzarote's curling corner kissed the crossbar and went out, and then Balwant Singh's header forced India Under-17 goalkeeper Dheeraj Singh to make a good save.

Everton Santos too, came close for the two-time champions soon after, while six minutes before halftime Jayesh Rane spurned ATK's best chance to take the lead by heading wide from handshaking distance from El Maimouni's corner.

At the halfway mark, both teams were locked goalless. The second half only came to life when Poplatnik broke the deadlock with ATK bringing on fit-again Eugeneson Lyngdoh in place of Balwant a minute earlier.

After the goal, home team coach Steve Coppell replaced Rane with the more experienced Cavin Lobo, but that did not change the tide of the game as Kerala ensured their victory when Stojanovic found the back of the net.

The Serbian received a long ball from Halicharan Narzary at the edge of the box, dribbled past Gerson and unleashed a pile driver which went past Arindam Bhattacharya.

The city-based franchise will next take on NorthEast United at home on October 4 while Kerala will host Mumbai City FC the next day.

Kerala Blasters FC Football
Get the latest Cricket news, check out the India cricket schedule, Cricket live score . Like us on Facebook or follow us on Twitter for more sports updates. You can also download the NDTV Cricket app for Android or iOS.