The Indian team will take on Kenya next in their next match on June 4. 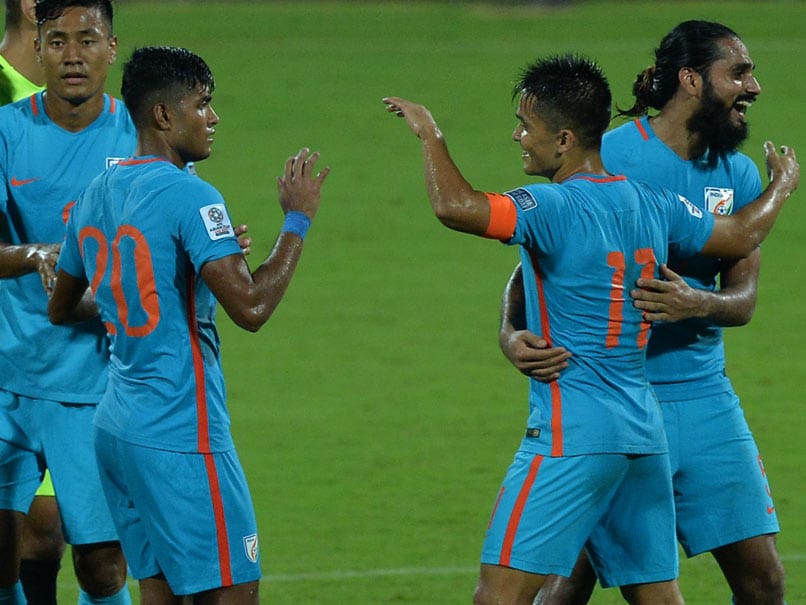 Hosts India kick-started their Intercontinental Cup campaign in style by thumping Chinese Taipei 5-0 in the opening match of the Cup in Mumbai on Friday. A Sunil Chhetri master-class performance proved to be the difference between the two sides as his hattrick, and a goal a piece by Udanta Singh and Pronoy Halder led India to an easy win over Chinese Taipei, in a match largely dominated by Constantine's men both in terms of possession and chances created, giving little to no room to play for the opponents. The attacking intent from the Indian team was there from the kick-off and an early build up in the first minute itself led Chinese Taipei to clear their lines, with signs of panic clearly showing in their defensive ranks. In the 3rd minute, Udanta Singh found Sunil Chhetri with a pass inside the box but Chhetri shot inches wide of the goal as the team pressed for an early goal.

It all came together in the 14th minute when Jeje side-stepped his marking players and released a peach of a through ball for Sunil Chhetri, this time the skipper did little wrong and slotted the ball into the back of the net to give India the solitary goal lead.

Spurred by the early goal and the 'Blue Army' - the travelling fans of the Indian National Team - Constantine's men looked to cement their position and in the 19th minute India almost doubled their lead. Sunil Chhetri capitalized on Anirudh Thapa's pass from the midfield but failed to curl the ball home from an angle after beating the defender.

In the 34th minute, Chhetridoubled India's lead after playing a one-two pass with Jeje to slice through the Chinese Taiperi defence lines and slot the ball home as the scoreline read 2-0. The skipper could have completed his hattrick in the 39th minute had his lob from close distance been not read by the opposition custodian.

On the opposite end, Gurpreet Singh Sandhu enjoyed life protected by the Indian defensive line that swept rare Chinese Taipei attacks from the flanks. Unable to find clear openings, the opponents tried to attack on the counter but could not make most of their opportunities.

In the 44th minute, Halicharan Narzary came close to tapping the ball home after Jeje's low cross from the left flank left the Chinese Taipei defence in tatters. The half-time scoreline read 2-0 in India's favour.

Changing over, India continued their momentum and in the 48th minute, Udanta Singh scored a phenomenal goal when he danced past the Chinese Taipei defence line with sublime footwork and placed the shot in the bottom corner to make the scoreline read 3-0.

Chinese Taipei survived a scare in the 57th minute when Anirudh Thapa's cross from the left flank led Chhetri to unleash a first-time attempt onto goal, but the presence of a defender on the line saved the opponents from trailing further behind.

But little did the skipper had to wait for the hattrick as in the 60th minute, Chhetri blasted the ball into the back of the net from close range after a corner kick scenario to make the scoreline read 4-0.

Pronoy Halder's rasping strike from distance in the 78th minute added more gloss to the scoreline as it read 5-0 and Rowlin Borges almost added another a minute later, but his shot went inches wide of the goal after Chhetri's cut a pass back for him.

Coach Constantine added to his list of debutants and handed International debuts to Subhashish Bose and second half substitutes Ashique Kuruniyan and Alen Deory who replaced Halicharan Narzary and Chhetrirespectively.

The Indian team will take on Kenya next in their next match on June 4.

India Football Team Sunil Chhetri Football
Get the latest updates on ICC T20 Worldcup 2022, check out the Schedule and Live Score. Like us on Facebook or follow us on Twitter for more sports updates. You can also download the NDTV Cricket app for Android or iOS.