The ISL final will be played at their home in Bengaluru on March 17. 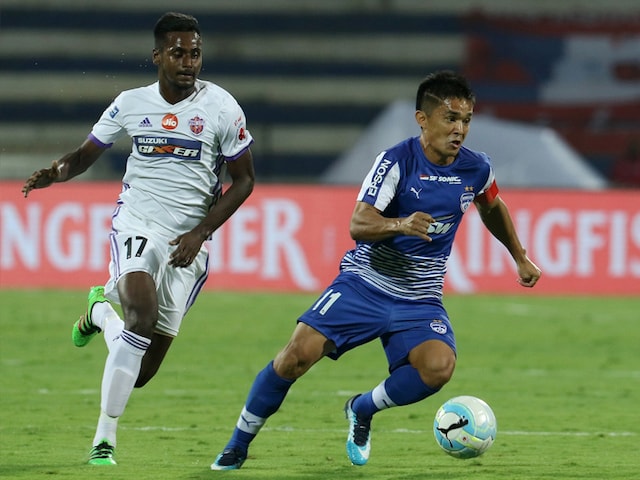 Bengaluru FC kept their date with history as they outclassed FC Pune City 3-1 and booked a place in the final of the Indian Super League at Sree Kanteerava Stadium, Bengaluru, on Sunday. After a goalless away draw, Bengaluru FC needed to score if they were to move to the final which will be played at their home in Bengaluru on March 17. The man who measured up to the challenge was their captain Sunil Chhetri, who struck a brilliant hat-trick and showed why he is India's best footballer by some distance.

Chhetri's first goal in the 15th minute was a lucky one as Pune City's defence made a mess of a routine header, but his second was a result of his class and confidence. It came from a penalty in the 65th minute which he had himself won, and it was the manner in which he scored that showed his class. A confident Chhetri simply chipped the ball over goalkeeper Vishal Kaith and scored with a style first made famous by Czech player Antonin Panenka during the Euros in 1976.

Pune City made things interesting when substitute Jonatan Lucca scored from a free-kick in the 82nd minute but Chhetri's class was on show again as he completed his hat-trick with a minute of regulation time left to be played.

Bengaluru FC will now meet the winners of the second semi-final between FC Goa and Chennaiyin FC for the final showdown on Saturday.

Coming into this game, Pune needed only a goal to make things complicated for the hosts. They didn't seem far off as they took the game to the opposition but lacked the final touch that would have given them a precious away goal.

Uruguayan striker Emiliano Alfaro came closest to finding their opening goal. On three occasions, he missed heading the ball by a whisker with only goalkeeper Gurpreet Singh to beat. The BFC goalkeeper didn't have to do much throughout the game apart from a good reflex save early in the game.

Bengaluru calmed early nerves with the opening goal in the 15th minute.  It was the captain who started it all, combining perfectly with Udanta Singh. From a counter, Chhetri did well to hold play and spray it to Udanta on the right. The winger got near the box and crossed at the far post where Chhetri's header towards goal saw Vishal and defender Gurtej Singh collide, allowing the ball to roll into the net.

Chhetri's second came in the second half as he drew a foul inside the box from Sarthak Golui, who first tackled him from behind and then pushed to the ground.

Chhetri himself stepped up to take the resultant penalty and surprised the keeper with a calm and composed Panenka.

The Sree Kanteerava Stadium erupted in joy at Chhetri's antics but there was late drama when Lucca's beautiful free-kick from just outside the box beat a diving Gurpreet and brought the contest back to life.

Another goal from Pune and that would have broken the blue hearts at Kanteerava and their captain proved to be the saviour again as Chhetri punished their rivals who had pushed ahead and left gaps behind.

Comments
Topics mentioned in this article
Sunil Chhetri Bengaluru FC FC Pune City Indian Super League Football
Get the latest Cricket news, check out the India cricket schedule, Cricket live score . Like us on Facebook or follow us on Twitter for more sports updates. You can also download the NDTV Cricket app for Android or iOS.