Both teams struggled with the quality of their final passes and showed a distinct lack of imagination in attack throughout the 90 minutes. 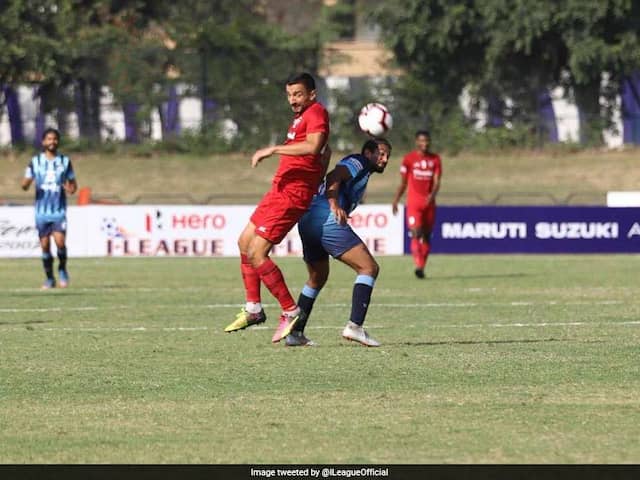 Minerva Punjab were held to a goal-less draw in their opening match of the season.© Twitter

Defending champions Minerva Punjab FC kicked off their campaign on an indifferent note as they were held to a goalless draw by Churchill Brothers in their first match of this season's I-League football tournament at the Tau Devi Lal Stadium on Sunday. Both teams struggled with the quality of their final pass and showed a distinct lack of imagination in attack throughout the 90 minutes. Churchill, however, had the better of the exchanges in the first half. The Goans were boosted by good performances by Dawda Cessay in particular as well as fellow midfielders Khalid Aucho and Lamgoulen Gou Hangshing.

However, it was Willis Plaza who was at the end of most of the chances that Churchill would create in the half and two of his misses stood out.

In the ninth minute, the striker found himself at the end of a free header after a corner by Cessay saw Aucho float in a wonderful cross from the right flank.

In the 20th minute, Plaza wasted the best chance of the half when Hussein Eldor snatched a ball from a defender deep inside the Minerva half.

He laid the ball onto Plaza's path who after beating last defender Lancine Toure only had an onrushing Bhaskar Roy to get away from. But the Minerva goalkeeper made a crucial interception right under Plaza's feet to deny Churchill a chance to take the lead.

Two substitutions by the defending champions within the first quarter of an hour in the second half saw them charge back to life. Dilliram Sanyasi replaced Naoream in the 54th minute while Ivorian Alexandre replaced Manadeep upfront.

This injected the much needed pace and flair and along with an inspired performance from man of the match Philip Njoku, Minerva looked threatening for most of the half.

Njoku got the first clear chance for Minerva in the 64th minute of the game when a low cross from Souvik from the right saw the ball fall favourably for the Nigerian inside the box. His curling right footer on the turn sailed over the bar.

Then a 1-2 between Njoku and Sangwan almost saw the Nigerian through to goal but Eldor, who had a brilliant match at the heart of the Churchill defence, brought about a crucial interception.

Souvik Das had also earlier played some threatening crosses into the box but a goal eluded the game even as Minerva brought in striker Sathyan Sabeeth for one final push for a win.

In the 90th minute, it was substitute Uttam Rai who had a golden chance to win it for the away side in fact, when an inocuous floater from Mohanraj on the overlap from the left, found him with just Bhaskar to beat. His volley went straight at the goalkeeper.

Comments
Topics mentioned in this article
Football iLeague
Get the latest updates on IPL 2020, check out the IPL Schedule for 2020 and Indian Premier League (IPL) Cricket live score . Like us on Facebook or follow us on Twitter for more sports updates. You can also download the NDTV Cricket app for Android or iOS.