Raphael Varane was the unlikely hero for Real Madrid with the defender scoring twice in the second half to seal victory, after Javier Galan's stunning strike had put SD Huesca in front. 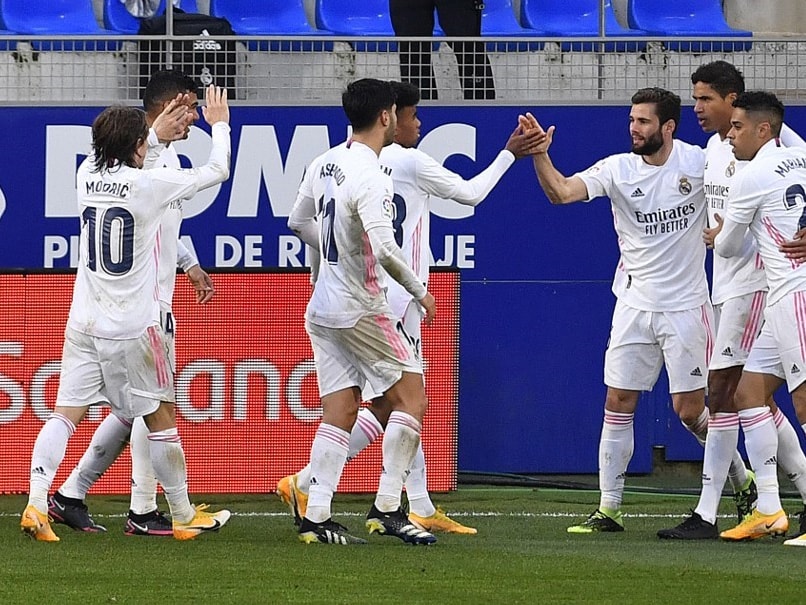 Real Madrid's reward for this win is to reduce the gap behind Atletico Madrid to 7 points.© AFP

Real Madrid came out fighting on Saturday as Raphael Varane scored twice to complete a gutsy 2-1 win, against bottom club Huesca and ease the pressure on coach Zinedine Zidane. An angry Zidane told reporters on Friday to show more "respect" after a poor run of results, prompted many to suggest Madrid need wholesale changes this summer. His players responded by digging deep against Huesca, with Varane the unlikely hero, the defender twice finishing in the second half to seal victory after Javier Galan's stunning strike had put Huesca in front.

Madrid also had Thibaut Courtois to thank after their goalkeeper made an excellent save with the scores level, before Varane tapped in the winner.

Zidane was back in the dug-out for the first time since testing positive for coronavirus, and the Frenchman will hope this result can kickstart a resurgence for his team.

"We won the league last year, not 10 years ago," Zidane said on Friday.

"Us, Real Madrid. Show a bit of respect for that."

Yet Madrid have been a pale shadow of the resilient, determined side that won the La Liga title at the end of last season.

Their reward for this win is to reduce the gap behind leaders Atletico Madrid to seven points, with Atletico boasting two games in hand.

Barcelona coach Ronald Koeman has already said it will be "very difficult" for anyone to catch Atletico, but Real Madrid are capable of putting together a run that at least puts their rivals under pressure.

'We have to fight'

They also have a Champions League last 16 tie against Atalanta fast approaching, and any momentum gained will be welcome.

"When things are difficult, you show character," said Varane. "It's a very important win, we have to change the dynamic. We have to win and improve the confidence. It's been a difficult time but we have to fight to the end."

After some early openings for Huesca, only Karim Benzema went close for Real Madrid in the first half, before Huesca came out firing at the start of the second half.

They twice hit the crossbar as Mikel Rico lobbed Courtois but his effort was just too high, and then Rafa Mir volleyed brilliantly at the back post but he was also denied by the woodwork.

In between, Huesca did take the lead as Shinji Okazaki broke down the right and pulled the ball back for Galan on the edge of the box.

With Madrid players back, the chance appeared lost but he swerved a sumptuous strike into the corner off the post.

Madrid, though, levelled just before the hour when Benzema's free-kick hit the crossbar and popped up, hanging in the air. Varane rose highest in the crowd gathered underneath to nod in.

Huesca would have regained the lead had Mir's bullet header not been superbly saved by Courtois and Madrid pushed for a winner, Marcelo and Benzema both going close.

With six minutes left, they found it, Toni Kroos' cross reaching Casemiro in the box and he had the composure to head across for Varane, who had an open net.

Karim Benzema Zinedine Zidane Thibaut Courtois Toni Kroos Football
Get the latest updates on IPL 2021, check out the IPL 2021 Schedule and Indian Premier League Live Score . Like us on Facebook or follow us on Twitter for more sports updates. You can also download the NDTV Cricket app for Android or iOS.