While some commented that Wesley Sneijder was thoroughly enjoying his retirement, others took digs at the pace at which he has gone out of shape. 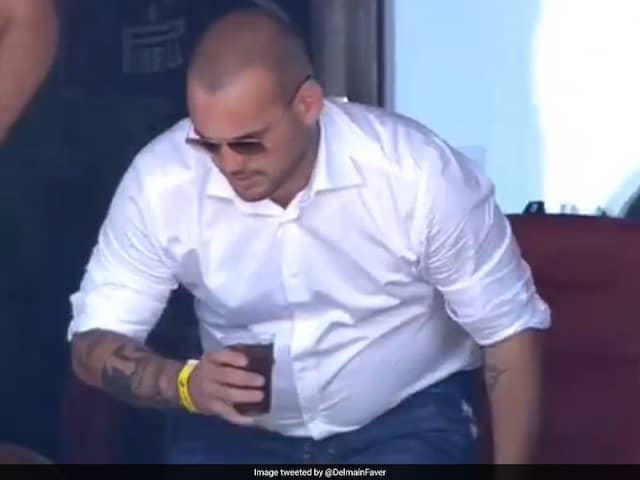 Wesley Sneijder, Holland's most-capped player with 134 appearances, has become the latest target of trolls on Twitter after retiring from professional football. A video featuring the Dutch star went viral on the social media platform and people were shocked to see Sneijder's go out of shape just inside two weeks of retiring from professional football. While some commented that he was thoroughly enjoying his retirement, others took digs at the pace at which he has gone out of shape.

Wesley Sneijder enjoying his retirement a bit too much pic.twitter.com/GbrDwqk19W

Wesley Sneijder looks like he has retired for 10 years pic.twitter.com/7szTk8NhGB

Wesley Sneijder played professionally LAST SEASON and this is what he looks like now. Bless him. This is real dedication. pic.twitter.com/CGDe475zrc

Wesley Sneijder during warm-up for a game of football with Ex-Internationals.
Damn can't imagine Suarez when he retires pic.twitter.com/Ohu9LZLuTf

I prefer to think of Wesley Sneijder in his true pomp. pic.twitter.com/g90qgwJfDJ

When did he retire again...
pic.twitter.com/Ga7aQWnuXa

Sneijder made his international debut in 2003 aged 19. In his 17-year long illustrious career he won many trophies for the club and the country.

He was part of the Netherlands team which finished as the runners-up in 2010 FIFA World Cup after losing to dominant Spain in the final.

Sneijder's displays earned him the Silver Ball for the tournament's second-best player behind Uruguay's Diego Forlan.

His run to the 2010 final with the Netherlands came after his finest season in club football. As the number 10, he led Inter Milan to a Serie A, Copa Italia and Champions League treble under Jose Mourinho.

Four years later in Brazil he took his side to third place after missing a penalty in the semi-final shoot-out loss to Argentina.

Sneijder was also named in the Euro 2008 Team of the Tournament despite his team's quarter-final exit at the hands of Russia.

He played in some of the top leagues across Europe and enjoyed a fair bit of success. Apart from Inter Milan, he also played for Dutch giants Ajax and Spanish giants Real Madrid among others.

He finished his playing career at Al Gharafa in Qatar's top-flight.