Wesley Sneijder vowed to not play in Qatar again after he was shown a red card during a Qatar Stars League match. 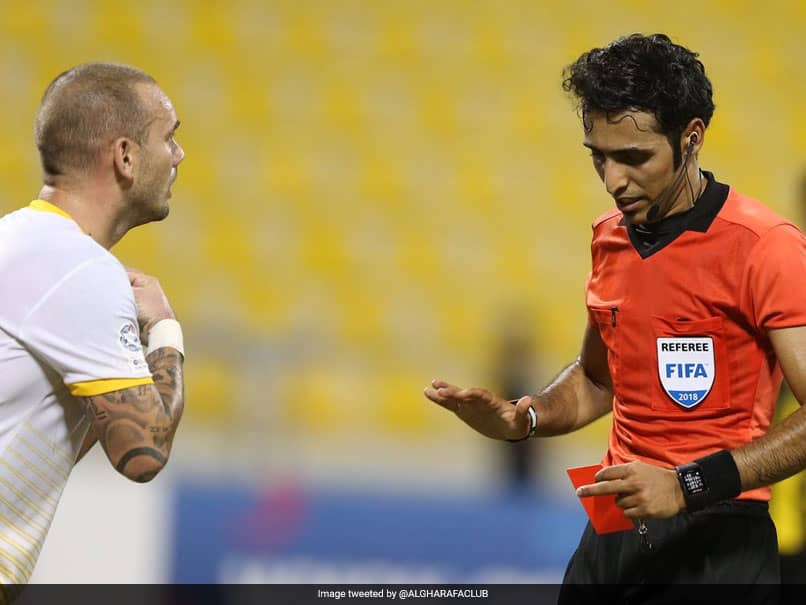 Wesley Sneijder threatened to quit Qatar after being shown a red card.© Twitter

Dutch star footballer Wesley Sneijder suffered an astonishing meltdown after being shown a red card during a match between Al-Gharafa and Qatar SC. The former Inter Milan star, regarded as one of the finest playmakers, threatened to never play in Qatar ever again after he was sent off with just a few minutes left on the clock. Sneijder, playing in the Qatar Stars League with Al-Gharafa, has scored 14 times in just 18 appearances. In a video doing the rounds on social media, Sneijder can be seen saying, "This is the last game I play in Qatar!".

The Dutchman was on a hat-trick in the match against Qatar SC when he picked up the red card for a foul on Qatar SC goalkeeper Jassim Al Hail. He jumped to avoid contact with the goalie but landed on the right hand of Al Hail.

The referee surprisingly showed him a straight red for the incident. A furious Sneijder gesticulated at the referee but to no avail and while making his way off the pitch  he was caught on camera repeatedly saying: "This is the last game I play in Qatar!".

After the match, the 34-year-old made a complete U-turn and tweeted his apology. In his apology, Sneijder wrote that he overreacted in the heat of the moment and enjoyed living, playing in Qatar.

While playing a football match I reacted in the heat of the moment to a red card I did not deserve. However, to counter any false media speculations: I enjoy living and playing football in Qatar! pic.twitter.com/WuC7Z7IHAU

Sneijder, the former Real Madrid and Inter Milan playmaker, moved to Al Gharafa of Qatar earlier this year from Ligue 1 side Nice. A star of the Netherlands team that got to the 2010 World Cup final is the most-capped Dutch player of all time.

Sneijder turned out for the Netherlands for the 134th and final time in the team's 2-1 friendly win over Peru in Amsterdam in September this year.

Netherlands Wesley Sneijder Football
Get the latest updates on India vs England Series, India vs England , live score and IPL 2021 Auction . Like us on Facebook or follow us on Twitter for more sports updates. You can also download the NDTV Cricket app for Android or iOS.