In his last nine matches, Gareth Bale has been taken off seven times, five of those when Real Madrid were chasing a goal. 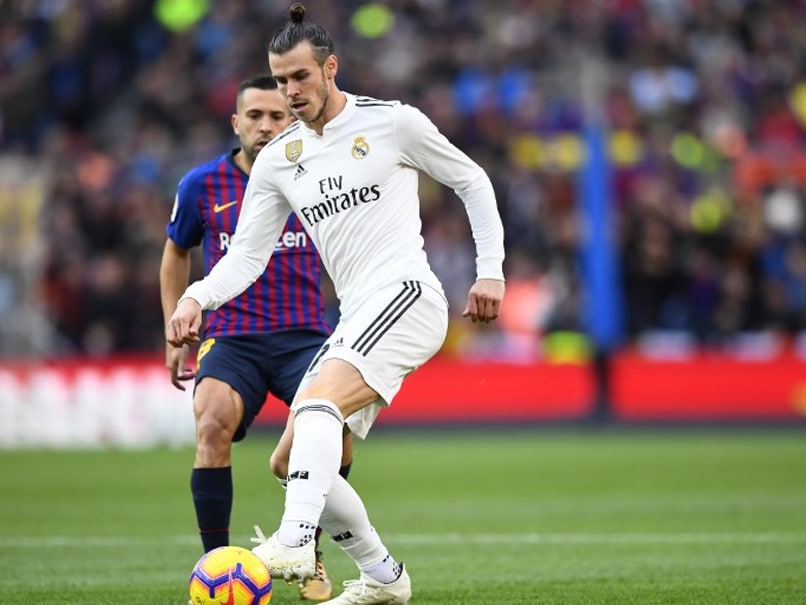 Support for Vinicius Junior has been intense and Gareth Bale is seen as the one standing in the way.© AFP

"Bale es fantastico", Real Madrid's interim coach Santiago Solari said, but still took him off in the 71st minute against Real Valladolid on Saturday. Madrid were drifting towards a 0-0 draw at their Santiago Bernabeu home and, searching for inspiration, it was Bale's number 11 that came up. He departed to whistles from the fans even if Solari, perhaps deliberately, spared him being being replaced directly by Vinicius Junior. Nevertheless, the 18-year-old came on two minutes later and made the difference, his shot deflecting in to give Madrid the lead.

"Another day, Gareth will score," Solari said. "And everyone will celebrate."

But those quickest to criticise Bale are circling again ahead of the trip to Viktoria Plzen in the Champions League on Wednesday.

Support for Vinicius has been intense and Bale is seen as the one standing in the way. "Vinicius puts Bale in trouble," read the frontpage of AS on Monday.

One week into his still-temporary tenure at Real, Solari is confronting the familiar problem of how to get the best out of Bale, now the team's most potent threat.

This season, free of both injury and Cristiano Ronaldo, he started well, posting four goals and two assists from his first six games.

But an adductor problem last month, combined with the team's crash under Julen Lopetegui, disrupted his rhythm. He has returned but is still not fully fit. His performances have lacked edge.

Still, the number of times Bale has been substituted has been a surprise, not least because his withdrawals have often come in the moments when Madrid should need him most.

In his last nine matches, Bale has been taken off seven times, five of those when his team were chasing a goal. Once, with the game at 0-0 against Atletico Madrid, he was replaced due to injury. The other four - while level with Athletic Bilbao and Valladolid, and trailing Barcelona and Alaves - the reasoning was less obvious.

Those calling for Vinicius to take Bale's spot perhaps overlook the Welshman's 24 goals in 41 appearances last season. Two of them won Real Madrid the Champions League final in May.

Vinicius, signed from Flamengo for 45 million euros in the summer, is a precocious talent but he has fewer appearances for Real in his career than Bale has goals since August.

"Footballers cannot fight against what goes on around them," Solari said. "The media, the fans, they are excited about Vinicius and that is fantastic, but his virtues are as evident as his weaknesses and his age. He has had almost no time to mature."

If Solari believes the excitement around the teenager is worth harnessing, perhaps the Brazilian could slot into a front three alongside Bale, rather than instead of him.

Benzema's early form has also dipped but he plays the role of an attacking pivot as well as anyone. Marco Asensio, who started against Valladolid, has been quiet while Isco is still regaining fitness after appendix surgery.

Finding the right combination, and extracting more from Bale, is likely to be top of Solari's priorities.

Discounting the Copa del Rey win over Melilla, who play in Spain's third tier, four of Madrid's last five goals have come from their left-back, central defender and an own-goal. "It's a very bad patch we've gone through," said Sergio Ramos on Saturday.

Club president Florentino Perez could yet be tempted into the transfer market in January, particularly after UEFA abolished their rule on players being cup-tied in European competitions. Harry Kane, Robert Lewandowski or Eden Hazard are no longer restricted like before.

But for Solari, the time is now. Beat Plzen on Wednesday and even a draw away to Celta Vigo this weekend might earn him the job until the end of the season.

A lack of alternatives means Perez would do well to look again in the summer, as long as Solari can keep them ticking over in the meantime. To do it, he will need goals, and Bale.

Viktoria Plzen Gareth Bale Football
Get the latest updates on IPL Auction 2023 and check out  IPL 2023 and Live Cricket Score. Like us on Facebook or follow us on Twitter for more sports updates. You can also download the NDTV Cricket app for Android or iOS.