India ended their maiden appearance at a football World Cup in any age group without opening their account and only one goal to show for their efforts. 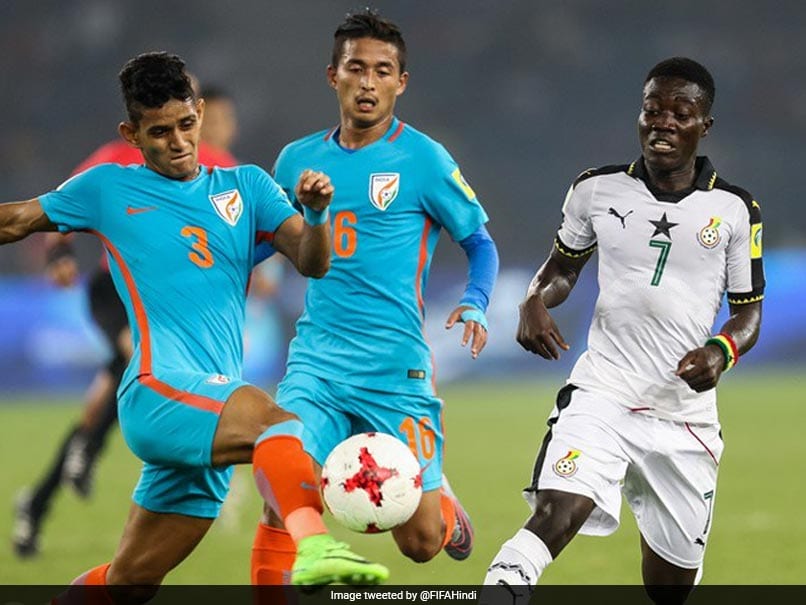 Ghana rode on a brace by skipper Eric Ayiah to enter the knockout stages with a 4-0 win over India in their Group A match of the FIFA U-17 World Cup here on Thursday. Eric (43rd, 52nd minutes) struck on either side of the break as Ghana finished the group stage with six points from three matches. Richard Danso (86th) and Emmanuel Toku (87th) scored in quick succession towards the end.

India ended their maiden appearance at a football World Cupin any age group without opening their account and only one goal to show for their efforts.

Ghana dominated right from the start and took the lead when their captain Eric Ayiah made a superb run from his own half before scoring off the rebound when Indian goalkeeper Dheeraj Moirangthem blocked a pass from Sadiq Ibrahim.

That goal was preceded by a lengthy period of tough, stubborn defending by the Indians.

The Indian players however, ran out of ideas in the final third.

They showed a distinct lack of composure when in possession and committed a lot of miss passes and errors as a result, losing the ball easily.

Lack of combination and poor awareness upfront repeatedly saw Indian players in possession but with no teammates in good positions to pass to.

Their job was made even tougher by a well organised Ghana defence which allowed them very little time and space.

The Africans, on the other hand, showcased excellent skills, tactical awareness and athletic ability.

Ghana right winger Sadiq Ibrahim was a constant threat down the flanks with his speed and accurate balls into the Indian penalty box.

Rashid Alhassan was also excellent on the left wing and Ghana captain Eric Ayiah in the centre had a constant stream of good passes and crosses as he used his superb technique and dribbling skills to trouble the Indian defence.

Only some desperate defending by the hosts prevented them from conceding more goals.

But that could not prevent Eric from scoring his second goal.

An excellent run saw the Ghana captain in acres of time and space at the edge of the hosts' penalty box as he met a pinpoint pass from Edmund Arko-Mensah with a superb finish.

The hosts virtually gifted away the third goal when Anwar easily lost the ball to Danso who made a speedy run before finishing past Dheeraj.

Tiku scored another soft goal a minute later as the Indians had a disappointing end to their World Cup campaign.

Comments
Topics mentioned in this article
India Football Team FIFA U-17 World Cup Football
Get the latest updates on ICC T20 Worldcup 2022 and CWG 2022 check out the Schedule, Live Score and Medals Tally. Like us on Facebook or follow us on Twitter for more sports updates. You can also download the NDTV Cricket app for Android or iOS.