The result in this play-off first leg tie has all but rendered next week's second leg at White Hart Lane meaningless and should see the English Premier League side Tottenham Hotspur safely into the Europa League group stages. 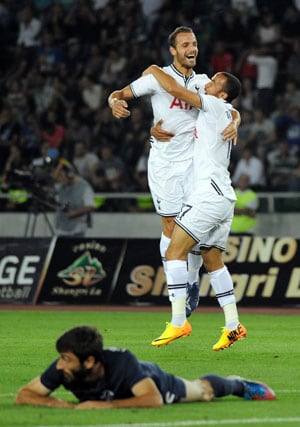 In a startling display, Townsend scored the opener and then set-up Brazil's Paulinho to open his Spurs account before laying a third on a plate for Roberto Soldado.

Soldado bagged another while young left-back Danny Rose scored his first for Spurs since netting on his debut against Arsenal in April, 2010.

Townsend's pinpoint crossing was in itself telling for a player who may be looking to displace Lennon in the north Londoners' first team this season, given the diminutive former Leeds United winger's own failings when centring from out wide.

The result in this play-off first leg tie has all but rendered next week's second leg at White Hart Lane meaningless and should see the English Premier League side safely into the Europa League group stages.

Townsend started off the rout when latching onto a ball cleared from the Spurs box following a Dinamo corner.

Kyle Naughton played the ball to Townsend, who raced 50 yards before firing low past goalkeeper George Loria from fully 25 yards on 11 minutes.

Iceland midfielder Gylfi Sigurdsson almost doubled the advantage when curling a free-kick from outside the area into the side-netting but the second goal did come two minutes before the break.

Naughton, again, released the lively Townsend down the right with a delicately chipped past and the winger turned inside his marker before picking out Paulinho's late run into the box with a perfect dinked cross, allowing the Brazilian to head simply home from six yards.

Townsend was at it again when he scampered down the right on 57 minutes, using his pace to reach the byline before picking out Soldado for a simple tap-in at the near post.

And it could have been more as Paulinho lost his bearings with an overhead bicycle kick after Townsend's delightful chip picked him out.

The respite for Dinamo was brief as Rose curled the pick of the bunch into the top corner from 20 yards on 65 minutes while three minutes later Soldado had another tap-in from six yards after substitute Nacer Chadli's fizzing cross from the left.

It could have been six seven minutes from time but young substitute Harry Kane's header from another inviting Chadli cross came back off the post.

In other early games, Jorge Molina and Cedric scored as Real Betis triumphed 2-1 at Czechs Jablonec, for whom Jan Kopic hit the net.