Tottenham only had to match Inter Milan's result at home to PSV Eindhoven, which they did, as the Italians only managed a 1-1 draw themselves. 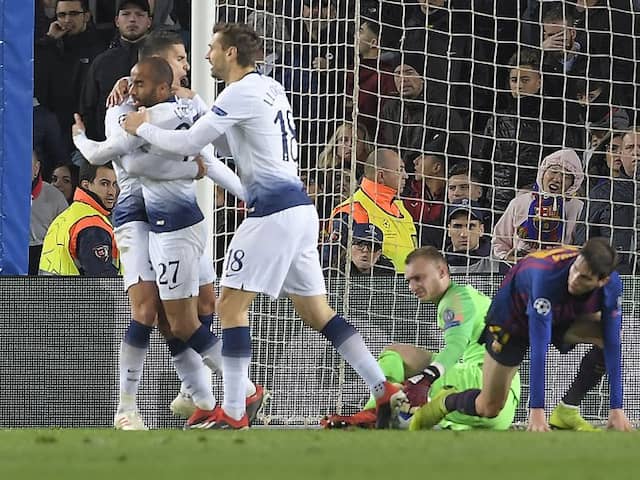 Tottenham Hotspur came back from the brink in the Champions League on Tuesday as Lucas Moura's late equaliser salvaged a 1-1 draw against Barcelona and sent them through to the last 16. Lionel Messi was left out of a heavily-rotated Barca line-up at the Camp Nou but Ousmane Dembele's stunning early goal looked set to put Spurs out, until Moura intervened. Mauricio Pochettino's side only had to match Inter Milan's result at home to PSV Eindhoven in Group B, which they did, as the Italians only managed a 1-1 draw themselves.

It made for a night of exhilarating drama, climaxing in the final five minutes when Tottenham must have wondered whether to push for a winner or hold on to what they had.

At the final whistle, their players faced an agonising 30 seconds, only for a roar in one of the stadium's deepest corners to tell them the whistle had blown in Italy.

"No-one believed in us," Pochettino said. "People said it was mission impossible but we are here. It is a massive achievement for the club."

Barcelona's coach Ernesto Valverde may not be popular with Inter supporters after he rested several key players, including Messi, but his team already had first place wrapped up.

"We qualified quickly and that speaks for itself," Valverde said. On Messi, who came on shortly after the hour, he added: "It's good to keep him busy."

Besides, Dembele scored a goal of which the Argentinian would have been proud, his brilliant run and finish providing the perfect riposte to more reports of indiscipline from the 21-year-old this week.

"It was a great goal, the kind only players with his talent can score," Valverde said. "We are happy with him."

When Barcelona crashed out in the quarter-finals in April, Valverde took much of the blame, the accusation that he failed to rotate his players in games of lesser importance.

Perhaps he listened, because while Messi's absence was the key point of relief for Tottenham, Jordi Alba and Marc-Andre ter Stegen, both excellent in recent weeks, were also left on the bench.

Spurs, though, were also unfamiliar, at right-back, where Kyle Walker-Peters made his Champions League debut and it was the 21-year-old's error in the sixth minute that gave Dembele a sniff.

He robbed the ball and tore away, brushing off Walker-Peters again before brilliantly dummying a late Harry Winks dive and finishing past Hugo Lloris.

Pochettino said he would be kept aware of the score at the San Siro, so news may have reached him soon after that PSV had taken the lead.

Son's best chance was still to come as he skipped away from Thomas Vermaelen's desperate challenge, which might have earned him a red card had Son tumbled. Instead, he powered on, only to see his shot meet Jasper Cillessen's leg.

Along with Dembele, Philippe Coutinho was Barca's biggest threat. He clipped the outside of Lloris' post with one bending effort before half-time and had another blocked by Walker-Peters just after.

The stadium had risen to its feet as Messi began warming up but Tottenham continued to push early in the second half. Harry Kane blazed over, put off balance by a nudge in the back from Vermaelen. Rose pulled back when he might have shot.

Barca fans cheered like they had scored when Messi came on in the 64th minute but the chances kept coming at the other end, where Moura, on as a substitute, failed to head in from five yards as Cillessen clawed the ball off the line.

Inter equalised against PSV, leaving Tottenham needing a goal with 15 minutes to play. Instead, they were almost dead and buried, as Coutinho again hit the post.

Finally, they found a way through. Erik Lamela threaded Kane free and he crossed for Moura five yards out. This time he could not miss.

Inter were still level but Spurs could hardly risk settling for a draw in case the Italians scored a winner. Kane's deadly disguised pass set Rose clear but he fired high. In the end, it mattered little as the whistle blew and Tottenham's players waited. Then they heard the cheers.

Barcelona Ousmane Dembele Lucas Moura Barcelona vs Tottenham Hotspur, B Football
Get the latest Cricket news, check out the India cricket schedule, Cricket live score . Like us on Facebook or follow us on Twitter for more sports updates. You can also download the NDTV Cricket app for Android or iOS.