The official handle of the Euro 2020 shared a clip in which Cristiano Ronaldo is seen waiting for his turn as teammate Pepe gets photographed before taking matters into his own hands. 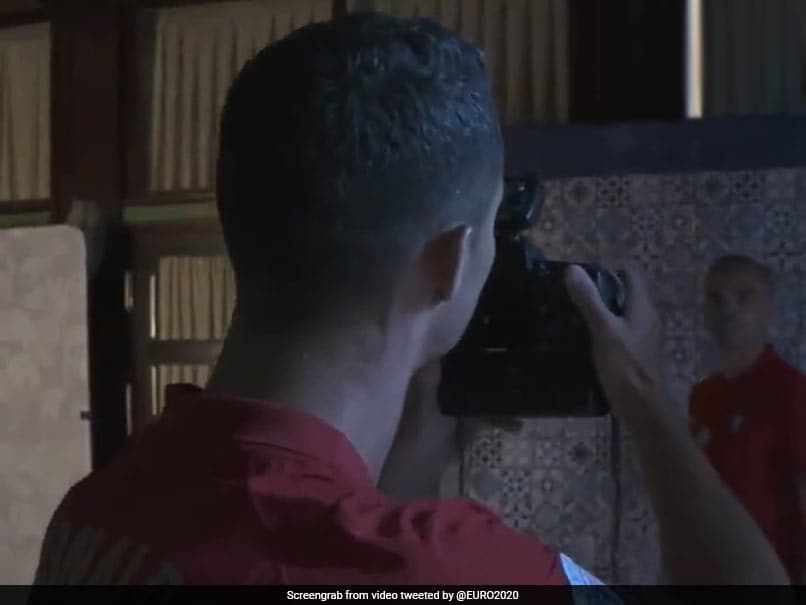 You have seen him score plenty of goals, almost at will, over the last 19 years of his career. He has won a record five Champions League and league titles in England, Spain and Italy. Yes, we are talking about arguably one of the best footballers in the world, Cristiano Ronaldo. That he has been photographed and featured on numerous magazine covers is something we already know, right? But did you know that the five-time Ballon d'Or enjoyed photography just as much as being the subject of it?

Reigning champions Portugal are currently taking part in the Euro 2020 and at one of the team photoshoots, Ronaldo showcased his photography skills.

The official handle of the Euro 2020 has shared a clip in which Ronaldo is first seen waiting for his turn as his teammate Pepe gets photographed.

Seconds into the video, the 36-year-old goes to the photographer and says, "Let me take a picture." He picks the camera, points it towards Pepe, and asks him to smile.

After clicking the picture, he shows it to the cameraperson and quips: "Better than you."

Ronaldo then moves towards Pepe, wraps his arm around his teammate's shoulder and the two raise a clenched fist.

The video ends with the photograph of the most experienced duo in the Portuguese side.

"When Cristiano Ronaldo turned photographer at the Portugal media day! "Better than you," read the caption accompanying the clip.

When Cristiano Ronaldo turned photographer at the Portugal media day! "Better than you!" #EURO2020 pic.twitter.com/y0LkqtaIlL

The video spread like wildfire on the social media platform with fans dropping fun comments in the reply section.

One of the users said, "Is there anything he can't do?"

Is there anything he can't do?

Another picked a GIF in which we can see CR7 celebrating after scoring a goal.

Then there was one who came with a request. "Please tell Pepe to smile...Man is always so serious on and off the pitch," the post read.

Please tell pepe to smile.. Man is always so serious on and off the pitch

"Don't you just love this guy? Love you, bro," read one of the comments.

Don't you just love this guy .
Love u bro

In the first game, earlier this week, Portugal struggled to breach the Hungarian defence until Raphael Guerreiro found the back of the net with a deflected effort.

It was all a Ronaldo show after that. The Portuguese captain scored a penalty just minutes later before doing what he does best inside the box -- meandering his way through his opponents to finish the game 3-0 in his side's favour.

The 36-year-old was also awarded the star of the match for his performance. With two goals, he also became the European Championship's all-time leading scorer and is just four goals shy of becoming the all-time leading goalscorer in the history of football.

Portugal will face Germany on June 19, Saturday in a Group F fixture.

Cristiano Ronaldo Pepe Euro 2020 Football
Get the latest updates on IPL 2021, check out the IPL 2021 Schedule and Indian Premier League Live Score . Like us on Facebook or follow us on Twitter for more sports updates. You can also download the NDTV Cricket app for Android or iOS.