Serie A: Christian Eriksen paid a visit to Inter Milan's training centre at Appiano Gentile for the first time since his cardiac arrest in the recently concluded Euro 2020. 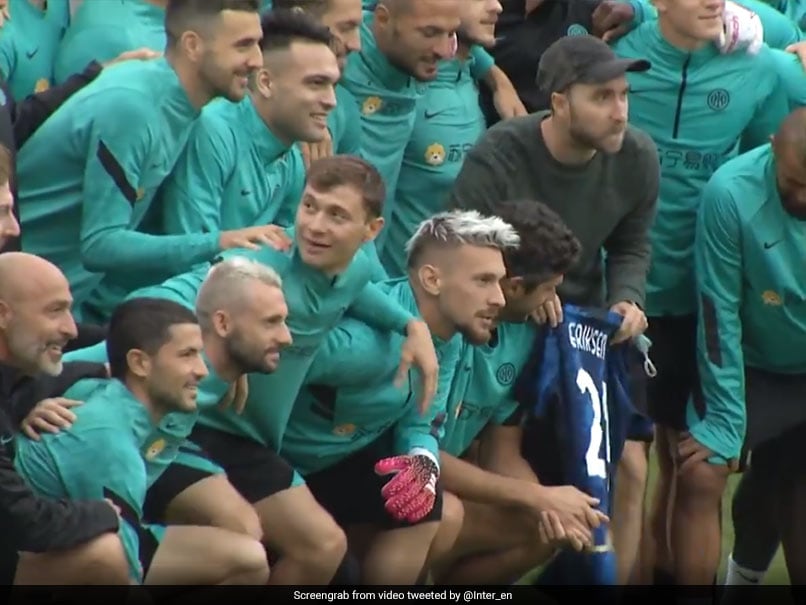 Serie A: Christian Eriksen poses for a photo with his Inter Milan teammates.© Twitter

Christian Eriksen on Wednesday met his Inter Milan teammates for the first time since suffering cardiac arrest at Euro 2020, in a visit to the Italian champions' training ground. In a statement, Inter said Eriksen, 29, paid a visit to the training centre at Appiano Gentile outside Milan on Wednesday morning. "The Danish midfielder met the club directors, the coach, teammates and all of the staff present. Eriksen is doing well and is in excellent physical and mental shape," Inter said.

Eriksen back at the Suning Training Centre pic.twitter.com/J35TO1EPRZ

"He will now follow the recovery programme put forward by Danish doctors in Copenhagen, who will also co-ordinate the clinical follow-up. The Inter medical staff will naturally be kept informed and up to date throughout the process."

Eriksen collapsed towards the end of the first half of Denmark's opening match at the European Championship against Finland, his life saved by the quick thinking of his teammates and medical staff at the Parken Stadium in Copenhagen.

His future at Inter is in the balance due to his pacemaker, as footballers with one fitted cannot play in Italy, unlike in some other countries.

The tests he is undergoing will eventually determine whether or not he can have it removed, allowing him to stay at Inter.

He is in any case not expected to be back in action for six months, whether he stays in Italy or finds a new club elsewhere.

He arrived in Milan on Tuesday and reportedly had a conversation with Inter CEO Giuseppe Marotta before travelling to the training ground on Wednesday to see his teammates and new coach Simone Inzaghi.

On Tuesday Anthony Taylor, the referee on the spot when Eriksen collapsed, said he "could tell straight away" that he was in a serious situation.

"I was actually looking directly at him when he fell over," Taylor told the BBC.

"I could see his face as he fell. I knew straightaway something was wrong because of how his face looked and how he fell to the floor."

Taylor praised Denmark skipper Simon Kjaer, who plays for Inter's city rivals AC Milan, and the medics who rushed onto the field and managed to save to his life.

"The real heroes on that night were the Danish captain and the medics who performed the initial CPR and defibrillation," Taylor said.

Kjaer and Leicester City goalkeeper Kasper Schmeichel won widespread plaudits for how they handled the incident, rallying around their teammate and at one point trying to calm Eriksen's distraught partner Sabrina Kvist Jensen, who fearing the worst had come running onto the pitch.

In the aftermath Schmeichel led criticism of the decision to finish the Finland match, which was held up for nearly two hours before being completed in a bizarre atmosphere, with several Denmark players in tears on the pitch.

Some Milan fans were so moved by Kjaer's leadership that they called for him to be made club captain.

In the absence of their star player Denmark rode a wave of emotion to go all the way to the Euro semi-finals, where they were eliminated by England at Wembley.

Inter Milan Euro 2020 Football
Get the latest updates on IPL Auction 2023 and check out  IPL 2023 and Live Cricket Score. Like us on Facebook or follow us on Twitter for more sports updates. You can also download the NDTV Cricket app for Android or iOS.