Antonio Cassano and Mario Balotelli scored the goals as Italy beat 10-man Ireland 2-0 at the Municipal Stadium here on Monday to reach the Euro 2012 quarter-finals. 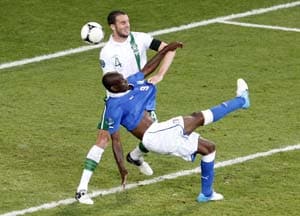 Antonio Cassano and Mario Balotelli scored the goals as Italy beat 10-man Ireland 2-0 at the Municipal Stadium here on Monday to reach the Euro 2012 quarter-finals.

Spain's 1-0 win over Croatia meant Italy finished second in Group C and will play the Group D winners in the last eight while Ireland finish bottom with three defeats.

While Italy were worthy winners, Ireland coach Giovanni Trapattoni will have been bemused to see his side concede both goals from corners.

But Italy coach Cesare Prandelli will also have been concerned by his side's dip in physical condition in the final 20 minutes, just as it did in their previous two games.

Ireland, who showed much will but little quality, finished the game a man down after Keith Andrews was sent off late on by referee Cuneyt Cakir.

"I think we played well tonight.

"We are certainly disappointed we didn't get anything out of the group. Set pieces did for us again tonight which is so odd as we are usually strong against them."

Having had their gameplan thrown into disarray by conceding early goals in their previous two matches, Ireland at least seemed fired up from the off.

Several times Ireland broke at pace and had the Italian defence back-pedalling but they spurned their own chances through either a wayward pass, poor decision-making or running down a blind alley.

Italy soon took command although Daniele De Rossi's left-foot volley from outside the box was a touch over-ambitious.

Selected ahead of Balotelli, Antonio Di Natale found space in the box three times only to see his shots blocked by Irish centre-backs Richard Dunne and Sean St Ledger.

Di Natale was giving Italy what Prandelli had asked for as he got in behind the defence to latch onto Cassano's through ball before rounding goalkeeper Shay Given and shooting goalwards, only to see St Ledger recover to hack the ball off the line.

Moments later Cassano set his sights from distance and although Given had his body behind the ball, he spilled it and was relieved to see it bounce behind for a corner.

That proved a costly blunder, though, as Cassano ran across Andrews to get a flicked-header on Andrea Pirlo's corner that squeezed past Given and over the line.

Italy kept the pressure on at the start of the second half as St Ledger and Dunne were called upon to block shots from Di Natale and Cassano respectively.

Given then had to get down to his near post to save from Di Natale after a slick Italian passing move that included a clever backheel from Motta.

Ireland created a couple of half chances and Andrews had a sight of goal but from 25 yards his volley dipped straight into goalkeeper Gianluigi Buffon's arms.

As they had done in the previous two games, Italy's physical conditioning dipped in the final 20 minutes and Ireland started really coming into the game with Andrews having a crack from a free-kick that Buffon could only parry.

Prandelli made a couple of substitutions and switched to a 4-5-1 formation with Balotelli as the loan frontman.

Late on he did brilliantly to hold off John O'Shea, who had a fistful of his blue shirt, to meet Alessandro Diamanti's corner with an acrobatic volley to kill the game and put the seal on victory.

The temperamental star seemed angry and started to say something before Leonardo Bonucci covered his mouth to prevent the Manchester City forward creating any controversy.

Comments
Topics mentioned in this article
Football Alou Diarra Lech Poznan Republic of Ireland Mario Balotelli Italy Euro 2012 Antonio Cassano
Get the latest updates on India vs Australia Series, check out the India vs Australia Schedule for 2020-21 and Ind vs Aus live score . Like us on Facebook or follow us on Twitter for more sports updates. You can also download the NDTV Cricket app for Android or iOS.