Bosnia-Herzegovina -- who had lost to Portugal in play-offs for the 2010 World Cup and Euro 2012 -- reach their first ever major finals. 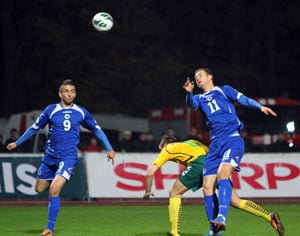 Bosnia-Herzegovina reached their first ever major finals on Tuesday as a 1-0 win over Lithuania saw them confirm their place at next year's World Cup.

They will be joined by holders Spain, who made no mistake in beating Georgia 2-0 at home in Albacete, and England, who also won 2-0 at home to Poland to reach their fifth successive World Cup finals.

England's manager from their failed 2010 finals campaign Fabio Capello will also be in Brazil after Russia got the point they needed with a 1-1 away draw at Azerbaijan.

Bosnia -- who had lost to Portugal in play-offs for the 2010 World Cup and Euro 2012 -- progress at the expense of Greece, who go into the play-offs, while Portugal finish runners-up to Russia and will also contest a winner takes all play-off.

Vedad Ibisevic was Bosnia's hero as he scored what was the most important of his 20 international goals as the 29-year-old Stuttgart striker struck in the 68th minute.

His sidefooted effort came just two minutes after he had seen another shot brilliantly saved by Giederius Arlauskas, who had denied Bosnia throughout the match in a stunning performance.

Arlausakas's performance could be put into the context that only the Germans and the Dutch have scored more goals in the qualifying games than the Bosnians.

"I congratulate these guys for their great work in the last four years," he told local TV.

"It would have been a real injustice if we had failed to win the group and qualify for the World Cup."

Greece by contrast have failed to sparkle in front of goal and were only able to beat Liechtenstein 2-0 in Athens leaving them with just 12 goals in their 10 qualifiers.

Spain's 2-0 win extends their remarkable record in being unbeaten in World Cup qualifying matches dating back to 1993 and while they have also like the Greeks not piled on the goals coach Vicente del Bosque said they had shown other qualities.

"We need to value what we have done in this group. It hasn't always been easy because the opponents have defended deep and made it difficult for us.

"But we have a virtue which is to keep the ball and have patience."

England have made solid if unspectacular progress during qualifying but their last two games -- home wins over Montenegro and now Poland have suggested that Roy Hodgson's side could yet come into full blossom at the finals.

"We've been working together for 18 months and the way we play has changed," said 66-year-old Hodgson.

"We're getting better all the time and hopefully will get better still. The players really are a group and they trust each other."

Capello, who was replaced by Hodgson shortly before Euro 2012 after the Italian resigned after a falling out with his bosses the Football Association, was also pleased with the manner in which is side had topped their group which had included the dangerous Portuguese.

"I'm satisfied with our performance in this qualifying campaign," said Capello.

"We finished in first place having such a strong opponent as Portugal in our group.

"We played well in all of the matches except the game in Northern Ireland where we produced unsatisfactory football (they lost 1-0). But in general I have positive memories from this campaign."

Portugal, Greece, France and Ukraine -- the latter two finishing runners-up to Spain and England respectively, will learn who their opponents are in the play-offs in the draw next Monday.

Portuguese coach Paulo Bento admitted they had not been the best team in the group but pledged his side would do their utmost to reach Brazil.

"When results and performances have not been good it is logical to shake things up," said Bento, who took them to the Euro 2012 semi-finals.

"However, we cannot as we have a short time only to prepare for the play-offs in the best possible manner."

Comments
Topics mentioned in this article
Euro 2012 Portugal Football Bayern Munchen England Spain John Terry Nani
Get the latest updates on India vs South Africa and check out  Schedule, Results and Live Score. Like us on Facebook or follow us on Twitter for more sports updates. You can also download the NDTV Cricket app for Android or iOS.