A Hall of Famer in England and Scotland, Kenny is the recent signing by tournament organiser IMG-Reliance as 'marque' manager. He will be joined by former Manchester United goalkeeper great Peter Schmeichel and France international Marcel Desailly. 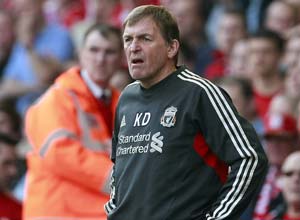 Liverpool legend Kenny Dalglish, popularly called 'King Kenny' by Reds' fans, will soon be seen coaching one of the eight franchise teams in the much-awaited Indian Super League scheduled to start in January 2014.

A Hall of Famer in England and Scotland, Kenny is the recent signing by tournament organiser IMG-Reliance as 'marque' manager. He will be joined by former Manchester United goalkeeper great Peter Schmeichel and France international Marcel Desailly.

IMG-Reliance & Star India this week, had announced the launch of Indian Super League, a football championship that will feature international stars and foster local talents, with the aim of making the game one of the country's flagship sport and India a name to reckon with in the global arena.

The league will feature eight city specific teams and will tap the burgeoning interest among the country's young population that's increasingly taking interest in the sport globally.

The league will kick off in January 2014 and will run through March.

Star India, which also owns broadcast and sponsorship rights, will use its leading network, superior content creation, packaging and presentation expertise to take the league to millions of households.

The league will have world-class international players play with the best from India.

Each team will have one marquee player, international footballers and the best of Indian talent.

Given India's burgeoning interest in football and the country's long association with the sport, the league is expected to herald a new era in the country's football culture.

Mumbai, Kolkata, Chennai, Delhi, Guwahati, Bangalore, Kochi, Goa and Pune have been identified as the nine venues that will be up for bidding.

Comments
Topics mentioned in this article
Football Alex Ferguson Fernando Torres Steven Gerrard Liverpool Denmark Manchester United FIFA Euro 2012
Get the latest updates on ICC Women's Cricket World Cup 2022 and IPL 2022, check out the Schedule , Live Score and IPL Points Table. Like us on Facebook or follow us on Twitter for more sports updates. You can also download the NDTV Cricket app for Android or iOS.