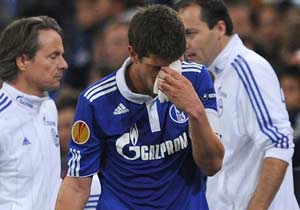 Dutch striker Klaas-Jan Huntelaar will likely not return to action before January because of knee ligament damage, according to Schalke sporting director Horst Held.

"We're going on the principle that he probably won't play during the first half of the season," Held told Sport 1 television channel.

Held said a decision on an operation would be taken in the "coming days", with the 30-year-old Huntelaar wanting a second opinion.

The Bundesliga's top scorer in the 2011-12 season has played only three games this season, and his latest injury, in training on Monday, comes after two months on the sidelines with a ruptured ligament in the same right knee.

Comments
Topics mentioned in this article
Football Robin Van Persie Shinji Okazaki Northern Ireland Borussia Dortmund Netherlands FC Schalke 04 Bayern Munchen Euro 2012
Get the latest updates on India vs South Africa and check out  Schedule, Results and Live Score. Like us on Facebook or follow us on Twitter for more sports updates. You can also download the NDTV Cricket app for Android or iOS.