The 22-year-old winger was handed his first cap by manager Roy Hodgson and the gamble paid off as he settled the hosts' nerves with a late strike after the visitors had threatened to come back into the game. 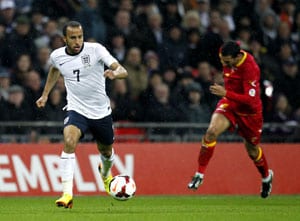 Tottenham Hotspur's Andros Townsend crowned his international debut with a fine goal as England beat Montenegro 4-1 on Friday to close on a place at next year's World Cup.

The 22-year-old winger was handed his first cap by manager Roy Hodgson and the gamble paid off as he settled the hosts' nerves with a late strike after the visitors had threatened to come back into the game.

Wayne Rooney broke the deadlock early in the second half and a calamitous own goal from Branko Boskovic doubled the hosts' lead, before Dejan Damjanovic replied for the visitors.

Townsend restored England's two-goal cushion with 11 minutes to play, however, driving home right-footed from 25 yards before an injury-time penalty from Daniel Sturridge completed the scoring.

Victory on a damp autumn evening at Wembley Stadium means that England will approach their final game at home to Poland on Tuesday needing another win to secure a berth in Brazil.

Poland's 1-0 defeat by Ukraine earlier in the evening ended their own hopes of qualifying, but England will have to do without right-back Kyle Walker on Tuesday after he picked up a caution that will incur a suspension.

Montenegro, meanwhile, must wait to make a first ever major tournament appearance, as they need Ukraine to lose at minnows San Marino in their final game to stand any chance of going through.

Hodgson displayed uncharacteristic boldness with his team selection, fielding Rooney, Sturridge and Danny Welbeck in attack and handing a debut to Townsend.

The Spurs man saw plenty of the ball in the game's early stages and showed commendable willingness to run with it, but the hosts were initially reduced to long-range sighters.

Visiting goalkeeper Vukasin Poleksic was finally called into action when he foiled Welbeck at his near post after a dogged run from Leighton Baines, before plunging to his left to repel a Steven Gerrard curler.

Montenegro were missing four first-team players, including captain Mirko Vucinic, and their only chance of note in the first half was a deflected Stevan Jovetic effort that was comfortably saved by his Manchester City team-mate Joe Hart.

Rusty finishing prevented England from making their territorial dominance count, however, with Rooney firing into the side netting when Poleksic parried from Townsend and Sturridge shanking a half-volley wide.

It was a first half of nerves and twitchiness for England, but they punctured the tension three minutes after the interval when Rooney struck.

Townsend's right-wing cross was only partially cleared and when Poleksic parried Welbeck's low shot, the Manchester United man followed up from close range to claim his sixth goal of the qualifying campaign.

The relief was palpable, but England were not safe yet.

From a free-kick that Walker conceded for a tug on Jovetic, earning him his costly booking, Hart had to save a Milan Jovanovic header and he was also called upon to thwart Boskovic moments later.

Boskovic's next contribution was to prove more telling, but unfortunately for him, it was to be at the other end of the pitch.

Sturridge's back-heel freed Welbeck on the left and although his cross was not destined for the foot of an Englishman, Boskovic blundered in, sliced his clearance, and watched in disbelieving horror as the ball bobbled past Poleksic.

Jovetic shook England out of their complacency with a 25-yard shot that hit the bar, before Damjanovic reduced the arrears in the 72nd minute by poking a shot from substitute Fatos Beqiraj past Hart.

It was to be Townsend's night, however.

He struck seven minutes later, with Sturridge netting from the spot in stoppage time to fire English dreams of the Copacabana.

Comments
Topics mentioned in this article
Football Euro 2012 Australia Cricket Team England Cricket Team Dinamo Tbilisi West Indies Cricket Team Tottenham Hotspur Ross Barkley Leighton Baines
Get the latest updates on SA vs IND 2021-22, check out the Schedule and Live Score . Like us on Facebook or follow us on Twitter for more sports updates. You can also download the NDTV Cricket app for Android or iOS.