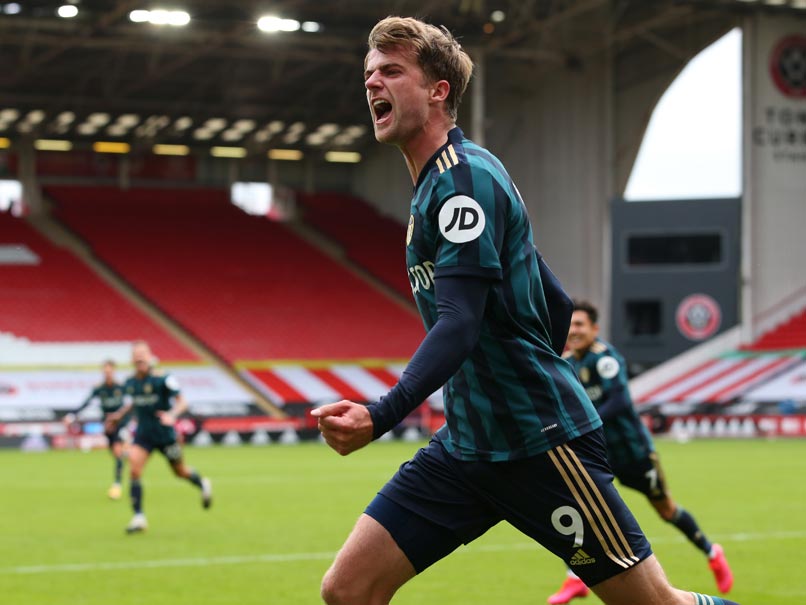 Leeds are enjoying their first season back in the top-flight English football for 16 years.© AFP

Patrick Bamford scored a dramatic late winner as Premier League new boys Leeds snatched a 1-0 victory at Yorkshire rivals Sheffield United on Sunday. Marcelo Bielsa's promoted side earned their second successive league win thanks to Bamford's header with just two minutes left. Bamford's third goal of the season settled a hard-fought clash that was dominated by superb displays from Leeds keeper Illan Meslier and Blades stopper Aaron Ramsdale. Leeds look well-equipped to enjoy a strong showing in their first season back in the top-flight for 16 years.

On their return to the Premier League, Leeds' first two games produced 14 goals and they were the first top-flight side to both score and concede seven goals in their first two matches since Liverpool in the 1932-33 season.

But they needed just one goal to earn a valuable victory at Bramall Lane.

"It was a just result. The first half was even. We could have scored, but we could have conceded and the second half was a lot better for us," said Bielsa, who refused to discuss reports linking Leeds with a move for Norwich midfielder Todd Cantwell.

The Blades have now lost six successive league games dating back to last season and they remain without a league goal this term.

"I'll be glad to see the back of September. Have we got another game in September? I don't think we have. So, a fresh start in October at Arsenal!" Blades boss Chris Wilder said.

The bad news kept on coming just before kick-off when Blades defender Jack O'Connell was ruled out for the season with a knee injury.

Leeds made a lively start to the first Yorkshire derby in the Premier League since 2001 as Luke Ayling tested Ramsdale from long range.

The Blades' lack of confidence was clear and John Lundstram should have ended their barren run when he met Ben Osborn's cross with a low strike, but Meslier flung himself to his right to make a superb save.

Ramsdale matched Meslier's impressive stop with a fine save of his own as he kept out a rising drive from Stuart Dallas.

Meslier was unconvincing in Leeds' first two games this season, but the 20-year-old made another good save to repel George Baldock's rising drive.

Helder Costa and Bamford had strikes turned away by Ramsdale as the keepers remained on top at both ends.

Even when Dallas managed to get past Ramsdale, Chris Basham was there to clear off the line.

Ian Poveda came on for Leeds and the former Manchester City youngster immediately saw Ramsdale push his shot over.

But Bamford finally broke the deadlock in the 88th minute as he ended Ramsdale's resistance with a close-range header from Harrison's cross.

Comments
Topics mentioned in this article
Leeds United Sheffield United Patrick Bamford Football English Premier League
Get the latest updates on ICC T20 Worldcup 2022 and CWG 2022 check out the Schedule, Live Score and Medals Tally. Like us on Facebook or follow us on Twitter for more sports updates. You can also download the NDTV Cricket app for Android or iOS.