Hardik Pandya dismissed Liam Livingstone after the latter hit him for a six and a four on consecutive deliveries. Livingstone scored run-a-ball 33. 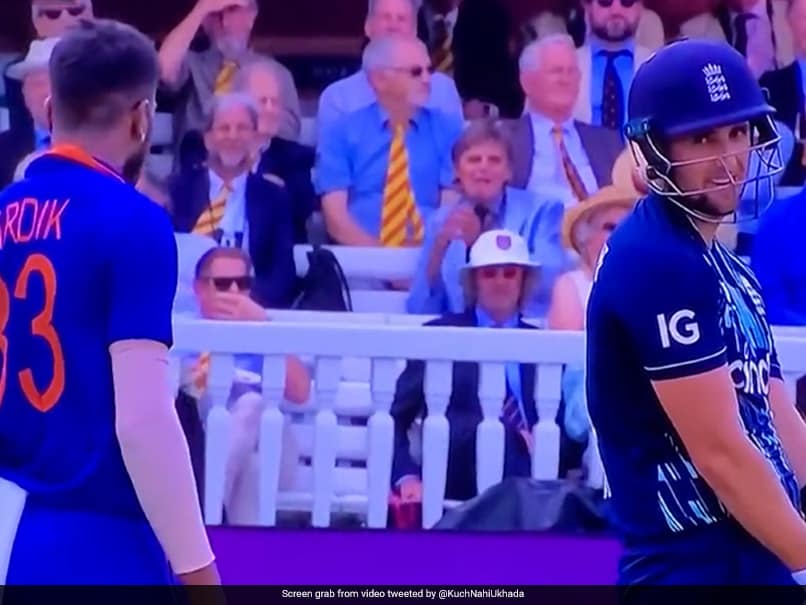 The second ODI between India and England on Thursday saw the hosts bouncing back at Lord's, London with a dominating 100-run victory. After being invited to bat first, England were bundled out for 246, riding on Moeen Ali's 47 off 64 and David Willey's 41 off 49. In reply, the hosts bundled out India for 146 runs. Reece Topley returned figures of 6 for 24, the best bowling figures by an England bowler in an ODI, to help the hosts level the three-match series 1-1 with a match to go.

Amid the many noticeable moments in the match on Thursday, Hardik Pandya's expression after dismissing Liam Livingstone grabbed eyeballs. Hardik got the wicket of Livingstone on the last ball of his fourth over. Before that Livingstone had smashed Hardik for a six and a four on consecutive balls. Given that he was hit for boundaries, Hardik wanted to mend the ways and he had the perfect answer in store as he ended up dismissing the batter. After getting the wicket, Hardik just stood his ground, staring and Livingstone while the England batter looked visibly disappointed.

Hardik returned figures of 2/28 in his six overs on Thursday as India stopped England at 246 all out. Yuzvendra Chahal was the pick of the Indian bowlers with figures of 4/27 in his quota of 10 overs. Meanwhile, Jasprit Bumrah scalped two wickets while conceding 49 runs in his 10 overs. Mohammed Shami and Prasidh Krishna claimed a wicket each.

In reply, Reece Topley's 6/24 saw India ending well short of the target. Topley bagged the Player of the Match award.

India and England face each other next in the third and decider ODI on Sunday. The match will be played at Emirates Old Trafford in Manchester.

Hardik Pandya England vs India, 2022 England vs India, 2nd ODI
Get the latest updates on Fifa Worldcup 2022 and check out  Fifa World Cup Schedule, Stats and Live Cricket Score. Like us on Facebook or follow us on Twitter for more sports updates. You can also download the NDTV Cricket app for Android or iOS.