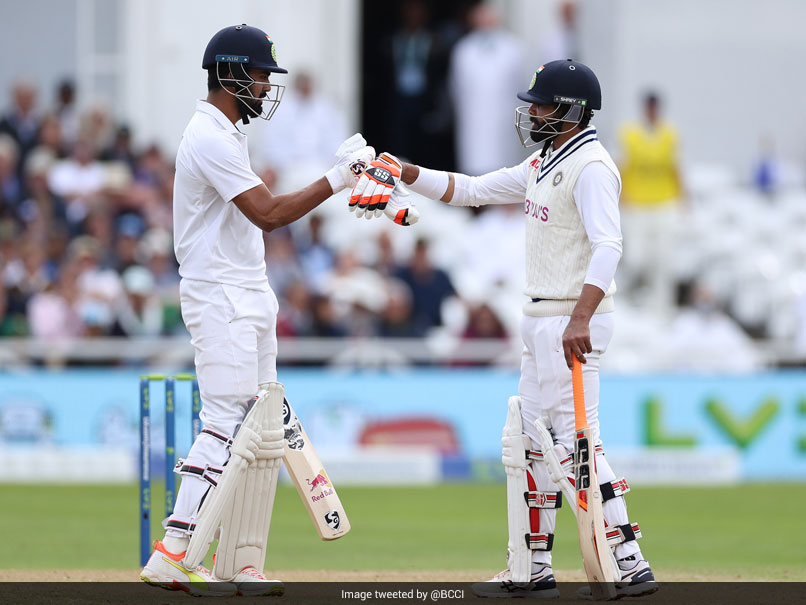 KL Rahul, Ravindra Jadeja and Jasprit Bumrah took a toll of England's attack in contrasting fashions to leave India well-placed in the first Test at Trent Bridge on Friday before rain brought about a premature end to the third day's play. Opening batsman Rahul, in his first Test for nearly two years, top-scored with 84 as India made 278 in reply to England's meagre first-innings 183. He was, however, helped on his way by two dropped slip catches that underlined England's position as the worst-performing cordon currently in Test cricket. At stumps, England were 25-0 in their second innings -- a deficit of 70 runs -- after rain meant only 50 overs out of the 98 scheduled for the day were bowled.

Rory Burns was 11 not out and Dom Sibley nine not out.

Kohli was unhappy when the umpires halted play after tea in seemingly light rain before a heavier downpour thwarted hopes of a resumption.

Earlier, all-rounder Jadeja's typically dashing 56 featured eight fours and a six and there was more pain for England when tailender Bumrah made a Test-best 28.

Ollie Robinson, playing just his second Test after being suspended following the re-emergence of racist and sexist tweets on his England debut against New Zealand at Lord's on June, enjoyed his first five-wicket haul in Tests with a return of 5-85 in 26.5 overs.

England great James Anderson's figures of 4-54 in 23 overs took him to 621 Test wickets, with only two retired spinners in Sri Lanka's Muttiah Muralitharan (800) and Australia's Shane Warne (708) now ahead of him in the all-time list.

India resumed Friday on 125-4 after Anderson had taken two wickets with successive deliveries -- including a golden duck for India captain and star batsman Virat Kohli.

Rahul was 57 not out after only being recalled to open when Mayank Agarwal was ruled out having been hit on the head batting in the nets on Monday.

But he should have been out for 52 when he edged Anderson only for Sibley to drop a routine catch at second slip.

After a rain delay of nearly an hour, Rishabh Pant hit Robinson for six before the seamer had his revenge when the left-hander mistimed a drive to short cover.

Rahul had added just one run to his score of 77 when he edged Anderson to first slip only for England captain Joe Root to drop the catch.

It was the 22nd chance dropped off Anderson's bowling in the past three years and confirmed England's position as the worst slip-fielding side in Test cricket since 2019.

Fortunately for England, Rahul's composed 214-ball innings ended when he nicked Anderson straight into the gloves of wicketkeeper Jos Buttler to end a stand of 60 with Jadeja.

Left-hander Jadeja, with only the tail for company, hoisted Anderson for a superb six high over square leg and celebrated an 81-ball fifty with his familiar 'sword' twirl of the bat.

He was out soon afterwards, a mistimed drive off Robinson well caught in a swirling breeze by the back-pedalling Stuart Broad at mid-off.

But the runs kept coming when Root took the new ball but, surprisingly, didn't give it to either Anderson or fellow veteran quick Broad.

Bumrah, whose previous highest score in his 21 Tests was 10 not out, smashed left-armer Sam Curran for 14 runs in three consecutive balls -- a pull for six bookended by two fours.

He was last man out well caught by Broad, running round from fine leg, off Robinson.

Broad, six years to the day since taking a Test-best 8-15 against Australia at Trent Bridge, his Nottinghamshire home ground, finished with figures of 0-70 in 20 overs.

James Anderson England vs India, 2021 England vs India, 1st Test Cricket
Get the latest updates on SA vs IND 2021-22, check out the Schedule and Live Score . Like us on Facebook or follow us on Twitter for more sports updates. You can also download the NDTV Cricket app for Android or iOS.