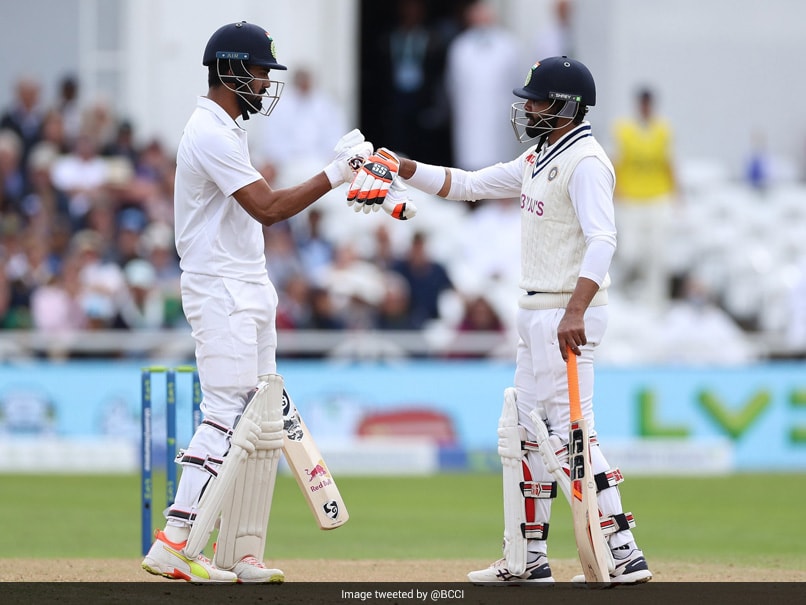 IND vs ENG: KL Rahul and Ravindra Jadeja were India's best performers with the bat.© Twitter

Play ended on Day 3 of the first Test at Nottingham with England at 25/0 and trailing India by 70 runs. Rain interrupted play shortly after the start of the third session and play could not resume. Half-centuries from KL Rahul and Ravindra Jadeja and a stubborn 33-run partnership for the last wicket between Jasprit Bumrah and Mohammed Siraj saw India post a score of 278 in response to England's 183, taking a 95-run first-innings lead. Earlier, Rahul moved on from 57 to 84 on Day 3, while Rishabh Pant added 25 quick runs. Jadeja scored his 16th Test half-century but even as England took some quick wickets, Bumrah, Siraj and Mohammed Shami did enough to put India in a commanding position. Ollie Robinson took his maiden Test five-wicket haul, while veteran seamer James Anderson took four -- becoming the third-highest wicket-taker in Test cricket in the process. Rory Burns was unbeaten on 11 and Dom Sibley on 9 when play was called off. (SCORECARD)