Virat Kohli, who last scored a century in 2019 against Bangladesh, has now gone 50 international innings in a row without a hundred. 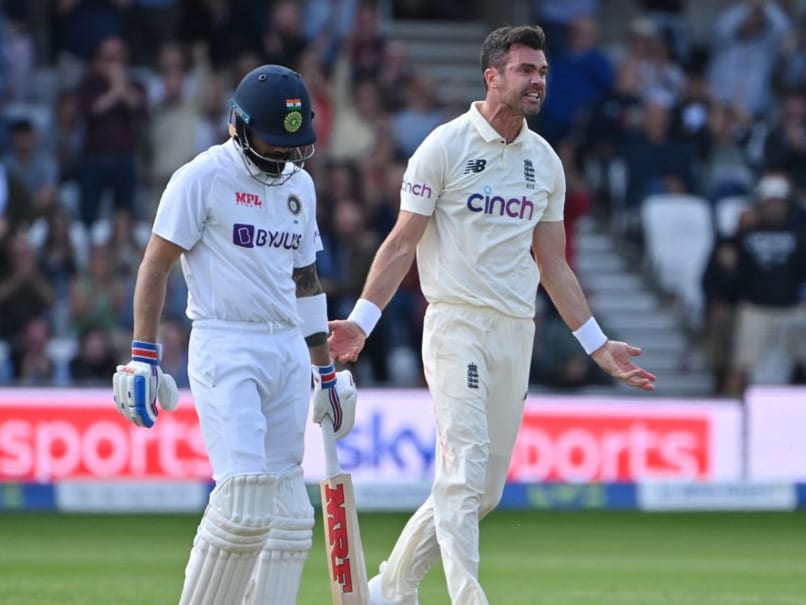 Virat Kohli was dismissed for 7 by James Anderson on Day 1 of the Headingley Test.© AFP

Virat Kohli might be seen as one of the best batsmen to ever grace the game but the India skipper has now gone past 50 innings in international cricket without scoring a hundred. Kohli's last hundred came way back in 2019 during the day-night Test against Bangladesh and ever since then, he has not gone past the three-figure mark across all formats. In the ongoing Headingley Test against England, Kohli went for a checked cover-drive on the final delivery of the 11th over but only managed to get a thick outside edge and Jos Buttler held on to a simple catch.

So far in the series against England, Kohli has batted in four innings, managing to score just 69 runs with his best score coming in the first innings of the Lord's Test when he registered 42 runs.

Kohli's dismissals in the ongoing series have become a huge cause of concern for India as he is being dismissed in the same manner, knicking the ball outside off and handing catches to either the wicketkeeper or slip-cordon.

England pacers James Anderson, Ollie Robinson, Sam Curran, and Craig Overton hunted in a pack as India were bundled out for 78 in the first innings in the second session of the opening day of the ongoing third Test in Leeds on Wednesday. Anderson and Overton scalped three wickets each while Ollie Robinson and Sam Curran took two wickets each.

Resuming at 56/4 after lunch, India once again got off to a bad start as Rishabh Pant (2) failed to get going and he was sent back to the pavilion by Ollie Robinson. This brought Ravindra Jadeja to the middle. The short ball once again led to the downfall of Rohit Sharma (19) and India were left staring down the barrel at 67/6.

Mohammed Shami (0), Ravindra Jadeja (4), Jasprit Bumrah (0), and Mohammed Siraj (3) failed to get going and India were bundled out for 78 inside 41 overs. England ended the day at 120/0 with openers Haseeb Hameed and Rory Burns both hitting fifties.

Earlier, James Anderson made the ball talk as he dismissed KL Rahul, Cheteshwar Pujara and Virat Kohli in the first session of the opening day.

Robinson also struck in the opening session as he removed Ajinkya Rahane (18) on the cusp of lunch break and the visitors were left reeling.

James Anderson
Get the latest updates on SA vs IND 2021-22, check out the Schedule and Live Score . Like us on Facebook or follow us on Twitter for more sports updates. You can also download the NDTV Cricket app for Android or iOS.