West Indies pacer Devon Thomas lost his balance while trying to stop a ball on the follow-up during his bowling. The incident saw his left shoe leaving his leg and fly on the pitch. 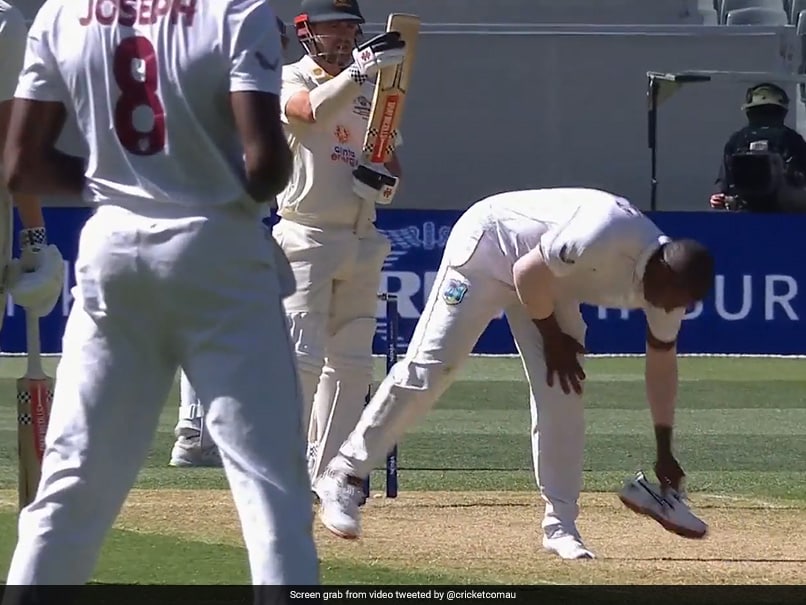 A hilarious incident took place during the ongoing second Test match between Australia and West Indies at Adelaide Oval on Friday. It was the first ball of the 113th over of the Australian innings when it happened to leave the spectators and commentators in splits. West Indies pacer Devon Thomas bowled a fuller ball to Australian batter Travis Head outside off stump. The southpaw failed to time his shot properly. The ball went to the left of Thomas, who dived in a bid to stop it. While his attempt went in vain, the Windies pacer lost his balance and his left shoe flew out of his leg.

Over, under, in and out!

Head and Marnus Labuschagne added 297 runs for the fourth wicket to keep Australia in the driver's seat vs Windies. Australia were reduced to 131 for 3 at one stage in the game on Thursday, but the duo of Head and Labuschagne helped the side regain control.

On the first day, Labuschagne and Head had hit unbeaten centuries as Australia reached a total of 330 for 3. After electing to bat, Australia lost the wicket of David Warner early before Usman Khwaja and Labuschagne steadied the ship, adding 95 runs for the second wicket. Khawaja was dismissed for 62, before Steve Smith fell two runs without troubling the scorers. Labuschagne was then joined by Head in the middle as the pair went on to add an unbeaten 199 runs for the fourth wicket by stumps on the day.

West Indies Cricket Team Devon Thomas Travis Head Australia vs West Indies, 2nd Test
Get the latest updates on IPL Auction 2023 and check out  IPL 2023 and Live Cricket Score. Like us on Facebook or follow us on Twitter for more sports updates. You can also download the NDTV Cricket app for Android or iOS.