After managing just 227 all out with the bat, Ashley Nurse and Shannon Gabriel grabbed three wickets apiece and captain Jason Holder picked up two as Sri Lanka were bowled out for 165 inside 44 overs 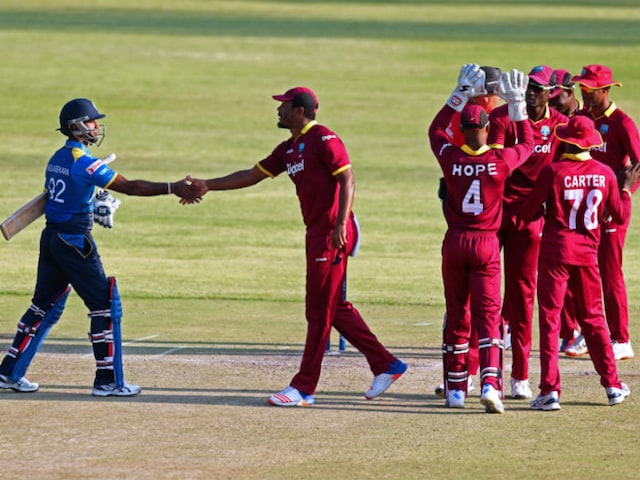 Superb bowling allowed the West Indies to overcome the absence of several key players as they beat Sri Lanka by 62 runs in the second one-day international in Harare on Wednesday.

After managing just 227 all out with the bat, Ashley Nurse and Shannon Gabriel grabbed three wickets apiece and captain Jason Holder picked up two as Sri Lanka were bowled out for 165 inside 44 overs.

As a result the West Indies also picked up a bonus point, putting them level on five points with Sri Lanka, who beat Zimbabwe in Monday's series opener in the triangular series.

"It's good to start off with a win in a short tournament," said Holder at Harare sports club.

"We fell short of our batting target but made up for it in the field, where I thought we were outstanding.

"It's good to start turning things around, and hopefully we can get some consistency going and start maturing."

Shorn of their biggest stars, including batsman Darren Bravo after he was sent home for comments made on Twitter about West Indies Cricket Board president Dave Cameron, the West Indians lost the toss and were asked to bat first in seam-friendly conditions.

They soon found themselves on the back foot, with Johnson Charles finding third man and fellow opener Kraigg Brathwaite run out by a direct hit from Nuwan Kulasekara.

Although their next three partnerships all reached more than 40, none were able to set up a significant total as Evin Lewis was caught behind off Sachith Pathirana's offspin for 27, and debutant Shai Hope was bowled for 47 by Asela Gunaratne.

Kulasekara then had top scorer Jonathan Carter caught for 57 at deep square-leg, and once Rovman Powell's entertaining cameo had been halted on 44 by Nuwan Pradeep, Kulasekara effected another run-out and grabbed a second wicket with the ball.

Despite the challenging conditions, the West Indian total looked short until a brilliant first spell from Holder yielded the wickets of Dhananjaya de Silva and Kusal Mendis, with a Charles direct hit helping to reduce the Sri Lankans to 16 for three.

"The bowlers did a great job to keep them to 227, but the batsmen didn't turn up today," said Sri Lanka captain Upul Tharanga.

It was Nurse who prevented any meaningful recovery in the middle of the innings, dismissing Tharanga and Gunaratne just as they were finding their feet at the crease, before having top scorer Pathirana caught in the deep as he threatened to bring Sri Lanka back into the game.

With Gabriel cleaning up the tail, the West Indies secured their first win outside of the Caribbean since March 2015.

The series will now move to Bulawayo, where Zimbabwe will take on the West Indies on Saturday.

Comments
Topics mentioned in this article
West Indies Cricket Team Sri Lanka Cricket Team Shannon Gabriel Cricket
Get the latest Cricket news, check out the India cricket schedule, Cricket live score . Like us on Facebook or follow us on Twitter for more sports updates. You can also download the NDTV Cricket app for Android or iOS.