Watch: Fielder Takes Clean Catch Inside The Ropes, Yet Gives Away A Six. Find Out How

Kent cricketer Jordan Cox thought he had taken a clean catch but a rare cricket rule led to change of emotions as the batting team was awarded six runs. 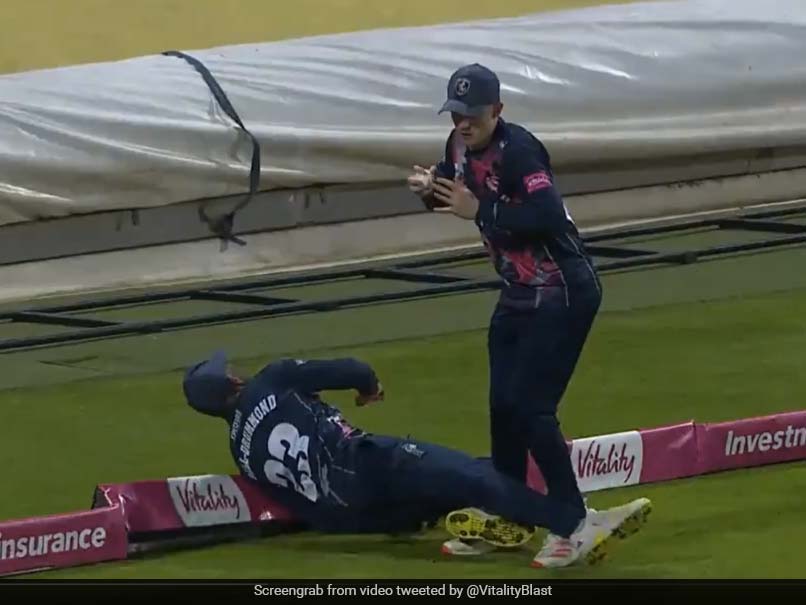 Somerset batsman Will Smeed got a lucky reprieve during the Vitality Blast T20 final against Kent when he was caught well inside the boundary but thanks to a collision between Jordan Cox and Daniel Bell-Drummond, he not only was deemed not out but got six lucky runs. Smeed had hit the ball towards the deep square leg fence where Jordan Cox took the catch. But Cox collided with Bell-Drummond, who was in contact with the boundary ropes. The decision was sent upstairs by the on-field umpires who decided in favour of the batsman.

While the decision led to a debate on social media, according to the laws of cricket the situation was open for interpretation by the umpires. As per MCC, Law 19.5.1 states that: "A fielder is grounded beyond the boundary if some part of his/her person is in contact with another fielder who is grounded beyond the boundary, if the umpire considers that it was the intention of either fielder that the contact should assist in the fielding of the ball."

The decision was made after the TV umpire interpreted that Bell-Drummond was intentionally assisting Cox with the catch.

In the match, after being sent in by Somerset, Kent posted a total of 167/7 thanks to half-century by Jordan Cox and a knock of 41 by Zak Crawley.

In reply, Somerset could only muster 142 from their allotted 20 overs, losing the summit clash by 25 runs.

Jordan Cox was adjudged player of the match for his unbeaten knock of 58.

Comments
Topics mentioned in this article
Jordan Cox Cricket
Get the latest updates on IPL Auction 2023 and check out  IPL 2023 and Live Cricket Score. Like us on Facebook or follow us on Twitter for more sports updates. You can also download the NDTV Cricket app for Android or iOS.