Watch: Emotional Tribute To The Queen Before England vs South Africa 3rd Test

England vs South Africa: There was a moving tribute to Queen Elizabeth II at the Oval before the start of England's 3rd Test against South Africa. 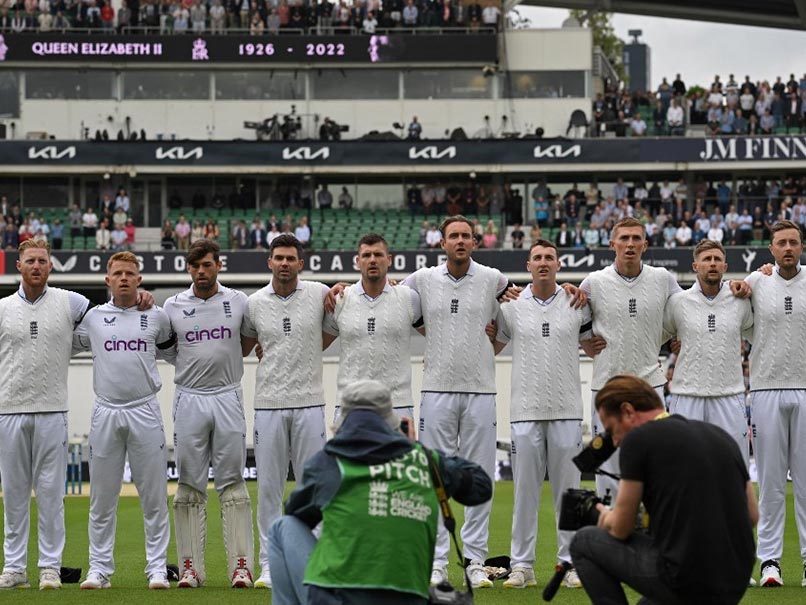 England players stand as the national anthem is played ahead of the 3rd Test.© AFP

Before the third Test between England and South Africa got underway at The Oval in London, the ground paid tribute to Queen Elizabeth II, who died on Thursday. The match was supposed to start on Thursday, but the first day's play was washed out with rain. Friday's play was called off in memory of the Queen. The match started on Day 3 of the Test, with both teams entering the field with the crowd standing in silence. The players passed through a military guard of honour.

A beautiful few moments as cricket pays its respects to Her Majesty The Queen. pic.twitter.com/3QnZiFEOKq

There was a minute's silence before an NCO of the Irish Guards chimed the bell.

The South African national anthem was sung and then the updated English anthem followed, with the crowd joining in.

The crowd then burst into applause before the match got underway.

The two teams came into the match with the series tied at 1-1.

Given that both matches were finished in three days, maybe the fact that the third Test will have only three days may not hamper chances of one of the sides getting a result out of it.

Winning the toss and opting to field, England got off to a brilliant start with the ball.

Ollie Robinson, James Anderson and Stuart Broad all rattled the visitors as South Africa were down to 36/6 in the 12th over.

South Africa Cricket Team England vs South Africa, 3rd Test Cricket
Get the latest updates on Fifa Worldcup 2022 and check out  Fifa World Cup Schedule, Stats and Live Cricket Score. Like us on Facebook or follow us on Twitter for more sports updates. You can also download the NDTV Cricket app for Android or iOS.