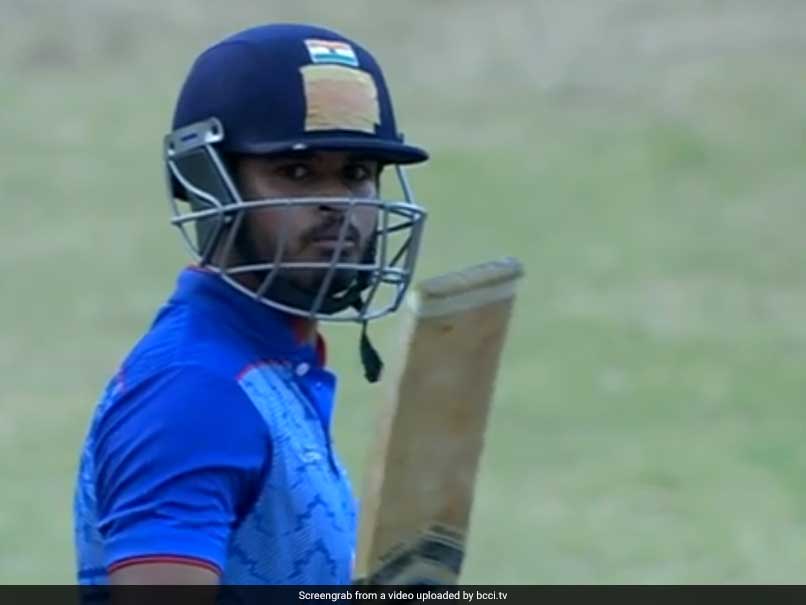 Shreyas Iyer remained not out on 55 off 53 balls.© bcci.tv

Prithvi Shaw and skipper Shreyas Iyer smashed half-centuries as Mumbai brushed aside Hyderabad by 60 runs in a rain-marred contest to move to the summit clash of the Vijay Hazare Trophy, on Wednesday. Chasing 247, Mumbai were placed comfortably at 155 for two when rain halted play. Iyer (55 not out) and Ajinkya Rahane (17) were at the crease with their unbeaten third wicket stand of 73 runs. The game never resumed after that and Mumbai were declared winners via VJD method. Left-arm spinner Mehdi Hasan struck twice, dismissing openers Rohit Sharma (17) and Shaw (61 off 44 balls) to leave Mumbai at 82 for two after their 73-run opening stand.

Shaw's knock had eight fours and two sixes. Shaw had hit a century on Test debut in Rajkot against West Indies. He amassed 237 runs in the series with an average of 118.50 and strike rate of 94.04 to be adjudged Man-of-the-series.

Earlier, Hyderabad posted 246 for eight after Rohit, Rayudu scored a 132-ball 121, which went in vain. The knock was studded with eight boundaries and four sixes.

Hyderabad had a dismal start with openers Tanmay Agarwal (11) and Akshath Reddy (7) returning to the pavilion early. Rayudu and Bavanaka Sandeep (29) then stitched a vital 50-run stand for the third wicket.

Mehdi Hassan made 23 off 17 to help Hyderabad put on board a respectable total. For Mumbai, Tushar Deshpande was the lead wicket-taker with three wickets for 55 runs and Royston Dias bagged two for 43.

India Cricket Team Prithvi Shaw Shreyas Iyer Cricket
Get the latest updates on SA vs IND 2021-22, check out the Schedule and Live Score . Like us on Facebook or follow us on Twitter for more sports updates. You can also download the NDTV Cricket app for Android or iOS.