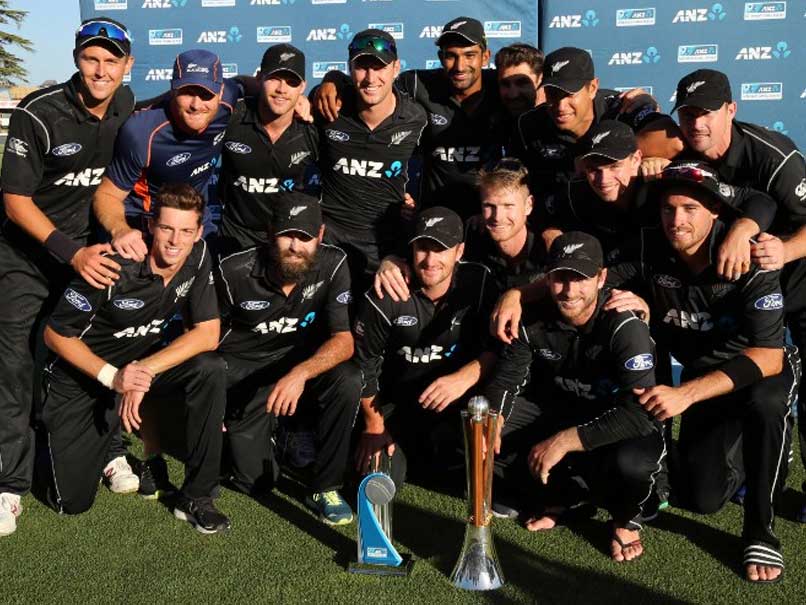 A six-wicket haul for Trent Boultand a Ross Taylor century carried New Zealand to a 24-run victory over Australia in the third one-day international on Sunday to win the series 2-0. Their masterclass saw New Zealand reclaim the Chappell-Hadlee Trophy while Australia also lost their outright hold on the world number one ODI ranking. They slipped to 118 ranking points, equal with South Africa, who beat Sri Lanka in Johannesburg on Saturday to go 3-0 up.South Africa will overtake Australia if they win the remaining two matches in that series.

When Kane Williamson won the toss he had no hesitation in batting first on the Hamilton wicket, correctly forecasting it would slow up as the day wore on and Boult would come into his own.

But in the prime early batting conditions, New Zealand appeared to have under-performed with their 281 for nine, despite Taylor's 107 off 101 balls and his century partnership with Dean Brownlie who made 63.

With rankings and the series at stake after New Zealand won the first ODI by six wickets and the second was washed out, Aaron Finch and Shaun Marsh made a flying start to Australia's reply, averaging more than six an over.

They were particularly harsh on Tim Southee, whose opening four-over spell cost 30 runs, while new-ball partner and man-of-the-match Boult then had one for 10.

Marsh was first to fall, run out for 22 and Peter Handscomb was bowled first ball by Boult.

Finch and Travis Head continued the charge with a 75-run stand for the third wicket before New Zealand broke through with their second two-wicket burst.

Williamson had Finch caught by Boult at deep midwicket for 56 and Glenn Maxwell was caught behind off Mitchell Santner without getting on the board, leaving Australia 120 for four.

Head and Marcus Stoinis looked to have the run chase under control in a 53-run partnership when Boult came back for his second spell and claimed Head for 53 and James Faulkner for nought in the space of four balls.

Stoinis pressed on to 42 before Santner claimed his wicket, reducing Australia to 198 for seven and a required run rate of 8.30 off the last 10 overs.

Mitchell Starc, who scored 29 not out, and Pat Cummins' 27 took Australia to within 32 runs of their target when Boult broke through again to claim the last three wickets in his final two overs to finish with six for 33.

Taylor was key to the New Zealand innings as he equalled Nathan Astle's New Zealand record of 16 ODI centuries.

He went to the middle with New Zealand 76 for two and Brownlie on 30.

By the time he reached his 50, Brownlie, back in the side for the first time in two years, had advanced only to equal his previous best 47.

While Taylor thundered along, New Zealand looked set to surpass 300 but when Brownlie went for 63 it triggered a middle-order collapse in which four wickets fell for 33 runs.

Faulkner, whose subtle changes of pace disrupted the New Zealanders, took three for 59 including the key wickets of Brownlie and Taylor.

Comments
Topics mentioned in this article
New Zealand Cricket Team Australia Cricket Team Ross Taylor Trent Boult Peter Stephen Patrick Handscomb Aaron Finch Cricket
Get the latest updates on ICC T20 Worldcup 2022 and CWG 2022 check out the Schedule, Live Score and Medals Tally. Like us on Facebook or follow us on Twitter for more sports updates. You can also download the NDTV Cricket app for Android or iOS.