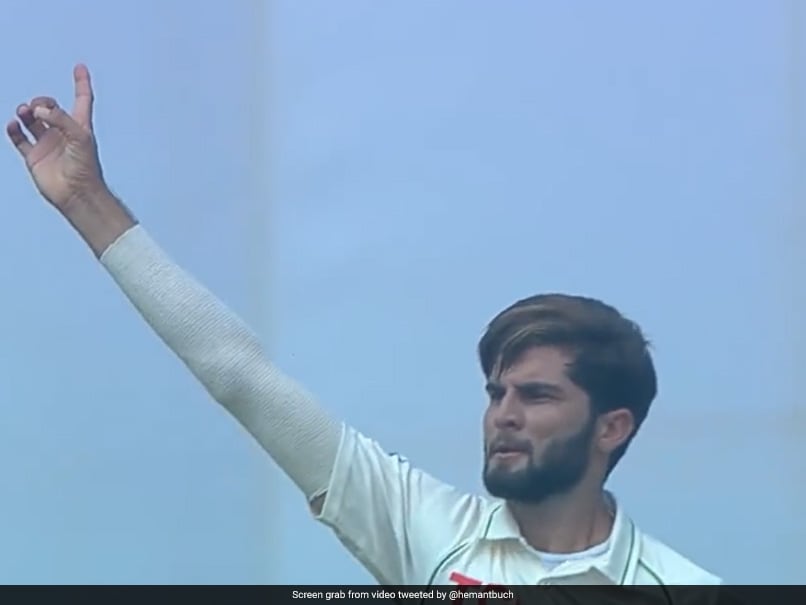 Shaheen Afridi ended with figures of four for 58 as Pakistan bowled out Sri Lanka for 222.© Twitter

Pakistan took control of the proceedings on Day 1 of the ongoing first Test against Sri Lanka at Galle on Saturday. Star pacer Shaheen Afridi led Pakistan's charge with four wickets on Day 1 as the Babar Azam-led side kept Sri Lanka under the pump. Shaheen gave Pakistan the first breakthrough in the morning session as he forced Karunaratne to chop a delivery on to his stumps. Shaheen pitched a good length delivery outside off, and Karunaratne came forward to defend it, but ended up getting a thick inside edge, rattling the off stump.

Shaheen ended with figures of four for 58 as Pakistan bowled out Sri Lanka for 222 in the first innings.

In-form batter Dinesh Chandimal restored some parity for Sri Lanka with a well-crafted knock of 76 to force Sri Lanka past the 200-run mark.

Apart from Chandimal, Oshada Fernando and Maheesh Theekshana also played cameos of 35 and 38.

In reply, Pakistan were 24 for two at stumps.

Kasun Rajitha dismissed Imam-ul-Haq early into the Pakistan innings, while Prabath Jayasuriya scalped Abdullah Shafique ahead of the close of the day's play.

Sri Lanka are currently third in the World Test Championship points table while Pakistan are fourth.

Dimuth Karunaratne Cricket
Get the latest updates on ICC T20 Worldcup 2022 and CWG 2022 check out the Schedule, Live Score and Medals Tally. Like us on Facebook or follow us on Twitter for more sports updates. You can also download the NDTV Cricket app for Android or iOS.