Faf du Plessis and David Miller combined to pull off a sensational relay catch at the boundary line to dismiss Mitchell Marsh in the second T20I. 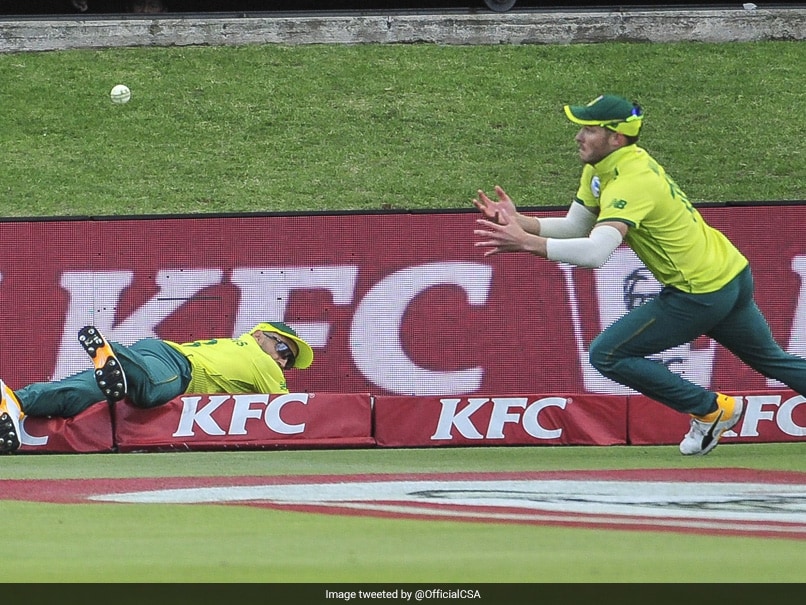 South Africa defeated Australia in the second T20 Internationalby 12 runs to level the three-match series on Sunday. While Quinton de Kock bagged the player of the match award for his swashbuckling knock of 70 off 47 deliveries, it was the duo of former South Africa captain Faf du Plessis and David Miller that stole the show with their moment of brilliance at the boundary line. In the 18th over of Australia's chase, Mitchell Marsh tried to hit Lungi Ngidi for a six straight down the ground but he found Faf du Plessis in the deep. Du Plessis caught the ball but with the momentum taking him over the the boundary, he decided to throw the ball to David Miller, who was coming charging in from long-off. The throw was not aimed properly but Miller dived full length to complete a sensational grab.

In the match, South Africa captain Quinton de Kock won the toss and opted to bat.

De Kock brought up his sixth T20I half-century and smashed five fours and four sixes during his stay at the crease.

Rassie van der Dussen also chipped in with a crucial contribution of 33 off 26 balls to help South Africa post a competitive total of 158 for four from their allotted 20 overs.

In reply, Australia started well as David Warner and Aaron Finch put on a 48-run stand for the first wicket before Ngidi cleaned up the latter in the fifth over.

Steve Smith then joined Warner in the middle and the duo put on a 50-run stand for the second wicket.

Four Australian batsmen failed to reach the double figures as the visitors fell 12 runs short of the target.

The final T20I will be played in Cape Town on Wednesday.

Mitchell Marsh Cricket
Get the latest updates on ICC T20 Worldcup 2022 and CWG 2022 check out the Schedule, Live Score and Medals Tally. Like us on Facebook or follow us on Twitter for more sports updates. You can also download the NDTV Cricket app for Android or iOS.