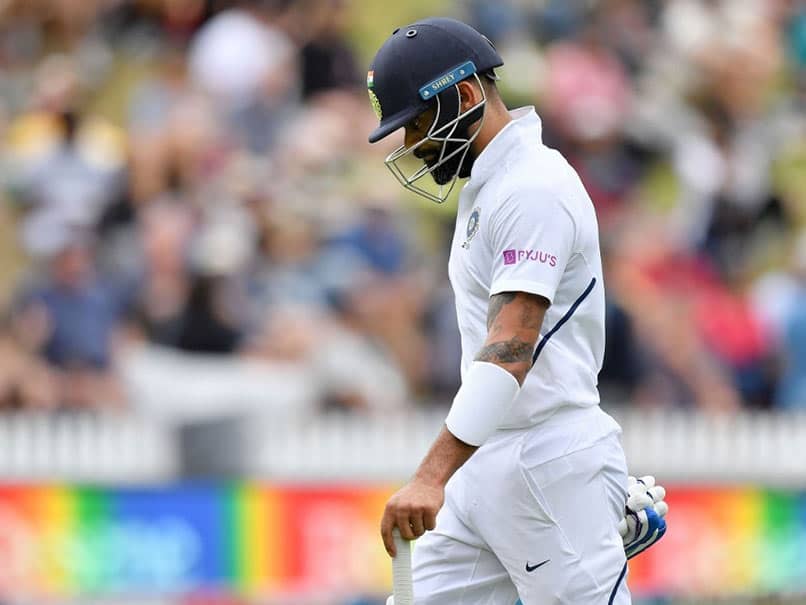 Virat Kohli has not scored a century in his last 19 innings.© AFP

Virat Kohli's below-par tour continued when he nicked a wide delivery from debutant Kyle Jamieson to first slip on the opening day of the first Test between India and New Zealand in Wellington on Friday. The Indian captain, whose top score of the tour is 51, managed just two runs before being caught by Ross Taylor. It was the fifth time during the ongoing tour that Virat Kohli failed to reach 20. The top-ranked Test batsman's abysmal outing even triggered a comparison debate on Twitter against Steve Smith. Many fans tweeted that Steve Smith is better in the longest format of the game as Virat Kohli can get runs only on flat tracks.

Here are some of the tweets

You never see Steve Smith getting out under 10 balls of a test match ffs. If he plays like this in Aus we gonna get whitewashed for sure

No doubt @imVkohli is the current best,
but when it comes to tricky pitches he gets out cheaply.
On the other hand we have @stevesmith49 , give him any ground any situation he will prove why he is the boss of test cricket ??#IndvsNz #TestCricket #BCCI

India plays hardly on green pitches and i haven't seen @imVkohli playing on green tracks. I think he is missing flat tracks. Thumbs up to @ajinkyarahane88 again proving y he is the most important batsman in overseas tours. And WHAT A PITCH! this makes test cricket alive #INDvsNZ

Steve Smith flourishes in difficult and challenging conditions.
Best test batsman in my opinion, way ahead of @imVkohli who still is tempted to chase the ball on sixth stump channel in seaming conditions. Poor cricket from a batsman I admire.#INDvsNZTestCricket #INDvsNZ #NZvIND

This series will bring back Virat Kohli to his deserved position.. & that is behind Steve Smith. ??

There I said it. #NZvIND

Kohli, who lasted just seven deliveries at Basin Reserve, has not scored a century in his last 19 innings.

His last three-figure score came in the day-night Test against Bangladesh in Kolkata when he scored 136.

However, this is not the first lean patch of Kohli's stellar career.

However, the competition between the two batsmen is much tighter in the longest format as Kohli has 27 Test centuries, while Steve Smith is not far behind on 26.

Interestingly, when it comes to Test average, Steve Smith is way ahead of Virat Kohli.

In terms of ICC Test rankings for batsmen, Virat Kohli tops the table with 928 points while Steve Smith occupies the second spot with 911 points.